Northern Afghanistan is considered to be relatively peaceful, compared to the south and east where the Taliban are strong.

The two other US deaths were caused by an explosion in the south, a US military spokesman said.

About 4,000 US marines, backed by a 650-strong force of Aghan security personnel, began an offensive – dubbed Operation Strike of the Sword – on Thursday in southern Helmand province.

The operation is aimed at seizing control of areas in the lower Helmand valley and then securing them with US, Nato or Afghan forces.

About 500 marines moved into the Khan Neshin area on Monday, according to a military statement.

“This is the first time coalition forces have had a sustained presence so far south in the Helmand River valley,” it said.

“Khan Neshin had been a Taliban stronghold for several years before Afghan and coalition forces arrived and began discussions with local leaders several days ago.”

There has been little resistance by the Taliban in Helmand, except for a few small skirmishes, but there has been an increase in violence elsewhere.

In Kandahar, which shares a border with Helmand, at least two people were killed in a suicide attack outside a Nato military base on Monday.

The bomber drove a car packed with explosives towards a line of lorry drivers waiting to supply US-led troops at the Kandahar airfield.

“It was a suicide car attack, which killed two truck drivers and wounded 10 more of them, along with two [Afghan] army soldiers,” General Sher Mohammad Zazai told reporters.

He said no foreign troops were killed or wounded in the attack.

Meanwhile, Taliban fighters claimed in a statement on a website that they were holding a US soldier who went missing from his base in Paktika province last week.

“It is to be said that five days ago, a drunken American soldier who had come out of his garrison named Malakh, was captured by mujahidin … He is
still with mujahidin,” the statement said.

There was no proof of the claim or further information about his whereabouts.

US defence sources said the American soldier walked off the base with three Afghans on June 30, leaving behind his body armour and weapons. 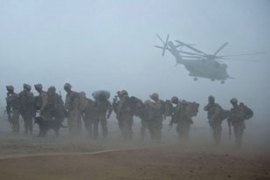 Two Nato-led soldiers killed in country’s south as 14 deminers are seized in the east. 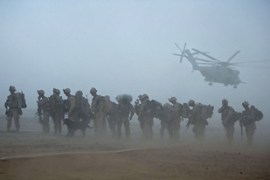 US casualties in Afghan offensive 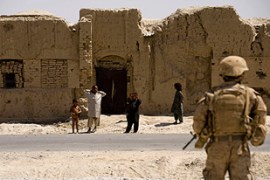 US soldiers killed in Afghan attack

Fighters say they will counter US offensive while Pentagon says still open to talks.