Her trial on charges of violating the terms of her house arrest is due to resume on the same day as the secretary-general’s arrival in Myanmar.

The case against the 64-year-old Nobel peace laureate centres on an incident in which an American man secretly visited her lakeside home and stayed there for two days.

She faces up to five years in prison if found guilty.

Her trial is due to resume on July 3 at Yangon’s Insein prison, where court proceedings have been held since May 18.

Michele Montas, Ban’s spokeswoman, told reporters that the UN chief plans to hold talks with officials from Myanmar’s military government, including Senior General Than Shwe in the remote administrative capital of Naypyidaw, and would raise “a broad range of issues”..

Ban believes that “three of the most important issues for the future of Myanmar cannot be left unaddressed at this juncture of the country’s political process,” Montas said.

“They are gaining the release of all political prisoners including Aung San Suu Kyi, the resumption of dialogue between the military government and its opposition, and creating conditions for credible elections.”

He also wants to “consolidate and build on” humanitarian aid efforts in the aftermath of Cyclone Nargis – the country’s worst ever disaster that left at least 138,000 dead.

Gambari, the UN chief’s special envoy to Myanmar, has visited the country eight times since his appointment to the post.

But critics say none of his visit have proved effective in nudging the country’s ruling generals towards significant political reform.

The US-based Human Rights Watch organisation, as well as some governments have tried to dissuade Ban from visiting Myanmar, saying that he could be exploited by the government, and his trip could be portrayed as legitimising Aung San Suu Kyi’s trial.

The opposition leader has been held in jail or under house arrest for more than 13 of the past 20 years, much of that time at her lakeside Yangon home guarded by police.

Opposition supporters and Western governments critical of the Myanmar have condemned the trial, labelling it a pretext for the ruling generals to keep Aung San Suu Kyi in detention during and beyond national elections it has scheduled for next year.

The government says the vote will mark the culmination of Myanmar’s “road map to democracy,” but critics say the regulations surrounding the election mean it will only cement military rule. 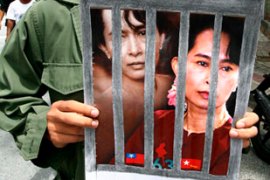