“The Supreme Court did not send the case files to the lower court, so the case has been adjourned until July 10,” Nyan Win told reporters.

He said Aung San Suu Kyi had “expressed her surprise that this happened.”

During his two-day visit to Myanmar the UN chief is expected to lobby Myanmar’s military rulers to free Aung San Suu Kyi and around 2,000 other political detainees.

He was expected to meet the country’s reclusive top ruler, Senior General Than Shwe, later on Friday.

UN officials have said he will also seek a one-on-one meeting with Aung San Suu Kyi, although it is not clear whether that will be permitted.

If such a meeting does take place, Ban will be the first UN secretary general to meet her since she was first detained in 1989.

The 64-year-old opposition leader is charged with violating the terms of her house arrest in a case that has sparked global outrage.

She has spent most of the past 20 years in jail or under house arrest and on Sunday she will mark her 5,000th day in detention.

The charges centre on an uninvited visit by an American man, John Yettaw, who sneaked past security on May 3 and swam to her lakeside home, where he stayed for two days.

He was arrested while trying to leave her house.

If convicted she faces up to five years in jail.

Opposition supporters and human rights groups have said the trial is a sham, trumped up by the military to ensure Aung San Suu Kyi remains in jail during elections that the military has said will take place next year. 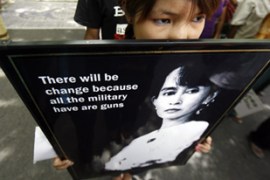 Ban Ki-moon arrives in Myanmar for talks with senior members of military government.