A spokeswoman for Britain’s foreign office said on Friday that two staff were still being held the Iranian authorities.

“Two of our staff remain in detention. I would reiterate what we said earlier this week, that the accusations against them are without foundation,” she said.

She said that the foreign office was “very concerned” about the suggested plans for them to be put on trial and would be “seeking immediate clarification from the Iranians”.

Iranian state television has reported that only one British embassy employee remains in detention.

An EU official told news agencies that the bloc had agreed to take a gradual approach towards Tehran, that could include visa bans and withdrawal of EU ambassadors.

“The first immediate action is to convey a strong message of protest against the detention of British embassy local staff and to demand their immediate release,” the official said.

“Iranian ambassadors of EU member states have been summoned … to convey this.”

Frank Belfrage, the Swedish state secretary for foreign affairs, whose country currently holds the EU presidency, said that he had told the Iranian ambassador to Sweden that Britain had the “full support” of all of the EU states.

Belfrage said: “We demand that Iran immediately release the locally engaged staff who are being detained. If this does not occur, the EU will take further action.”

However, Europe is also keen to avoid alienating the Iranian government at a time when the international community is seeking to persuade Iran to stop enriching uranium for its nuclear programme, which Tehran insists its programme is purely to meet a civilian energy needs.

“Since the idea of pulling out all EU ambassadors has been floated (on Sunday) seven out of the nine embassy detainees have been freed,” an EU diplomat told the AFP news agency.

“This is a measured approach and we have to give some flexibility to those in Iran seeking to help us to obtain our goals.”

The idea of summoning Iranian ambassadors arose from a meeting of EU political directors in Stockholm on Thursday. It was endorsed at a meeting of the EU’s political and security committee in Brussels on Friday.

Iran’s leaders have repeatedly criticised Western nations – particularly Britain and the United States – for “interferring” in the country’s internal affairs since the re-election of Mahmoud Ahmadinejad, the president.

Last month, Manouchehr Mottaki, Iran’s foreign minister, said that ties with Britain could be downgraded after the two governments expelled an number of each other’s diplomats.

Tehran has also expelled a correspondent for the BBC television network and arrested a British-Greek reporter.

The authorities have said 17 protesters and eight members of Basiji pro-government militia were killed in the two weeks of unrest following the vote. 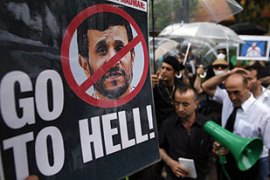 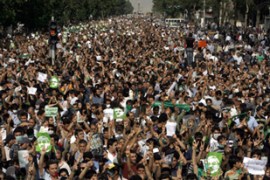 Legitimacy of Ahmadinejad’s new government will not be recognised, his challenger says.