Under the terms of the deal, Yahoo will turn over its search technology to Microsoft, which recently launched Bing, an overhauled version of its own search engine.

In turn, Yahoo will get to keep 88 per cent of the revenue from all advertising that will run alongside search requests on its site for the first five years of the deal.

Yahoo will also be allowed to sell search advertisement on some Microsoft websites. Microsoft did not grant Yahoo an upfront payment as part of the deal.

The agreement comes a few months after an attempt by Google to forge a advertising partnership with Yahoo, its nearest competitor in online search technology, was thwarted by US anti-trust officials.

Micosoft hopes its deal with Yahoo will enable it to introduce Bing to a wider audience.

Microsoft and Yahoo handle 28 per cent of the internet searches in the United
States combined, compared to Google’s 65 per cent, according to comScore, an online measurement company.

In the rest of the world, Microsoft and Yahoo’s combined 11 per cent share of the internet audience lags far behind Google’s 67 per cent.

Yahoo says that the deal will increase its annual operating profit by $500m and save the company about $275m on spending a year, as it will not have to invest as much in its own search technology.

The deal is expected to be finalised in the first few months of 2010. The partnership could take another two years to be set up fully.

Shares in Yahoo dropped $1.91, or 11.1 per cent, to $15.31 in morning trading, as investors criticised the lack of a cash windfall from Microsoft as part of the deal. 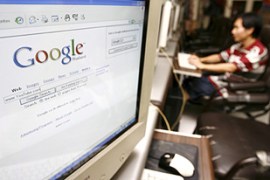 Company aiming to convince PC makers to ship computers with its operating system. 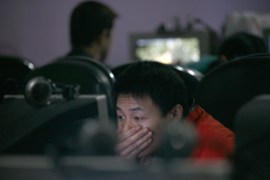 Disruption to service comes after China accuse search giant of linking to pornography. 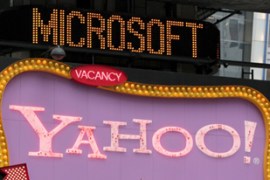 Yahoo’s Yang to step down

Internet firm’s co-founder blamed for failed Microsoft acquisition to step down as CEO. 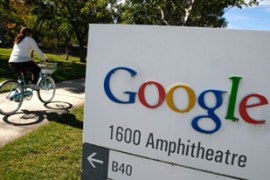