“We’re also trying to develop … bilateral issues that we have  with the Syrians as well. I would imagine both of those will come up.”

Barack Obama, the US president, has moved to re-engage Damascus in a bid to breathe new life into  faltering peace talks between Israel and the Palestinians.

Relations between the US and Syria were strained under the administration of George Bush, Obama’s predecessor, but have begun to improve under Obama, with Mitchell on his second visit to Syria in as many months as Middle East envoy.

Al Jazeera’s Zeina Awad, reporting from Damascus, said: “If you read the Syrian press and you speak to Syrian officials, there is generally a real respect for Barack Obama and a real appreciation for this on going engagement with Syria and with the Syrian regime.”

In June, Washington announced its decision to send an ambassador back to Damascus to replace the envoy who it recalled in 2005 after the assassination in Beirut of Rafiq al-Hariri, the former Lebanese prime minister.

The killing was widely blamed on Syria although Damascus has steadfastly denied any involvement.

The US has also accused Damascus of supporting so-called “terrorist” groups, seeking to destabilise Lebanon and allowing transit through Syria of weapons and fighters headed to Iraq.

Syria’s support for Hamas, the de facto government in the Gaza Strip, and its relations with Iran, could make Damascus key to US efforts to forge a new peace process in the region.

In a recent interview, Obama said: “There are aspects of Syrian behaviour that trouble us and we think that there is a way that Syria can be much more constructive on a whole host of these issues.”

As the US steps up its diplomatic efforts, with Gates due in Israel and Jordan, James Jones, Obama’s national security advisor, is also due in the Middle East later this week. 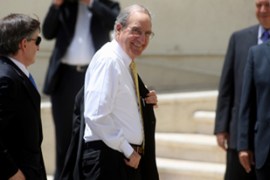 US envoy set for Syria talks

Peace process with Israel expected to dominate meeting in Damascus.