Barzani’s Kurdistan Democratic Party (KDP) and the Patriotic Union of Kurdistan (PUK), headed by Jalal Talabani, the Iraqi president, are expected to sweep the parliamentary poll.

But a number of independent candidates like Nusherwan Mustafa, a wealthy entrepreneur and former PUK deputy, are working to break the PUK-KDP monopoly.

“We think that Kurdish society, after a political stabilisation, now needs economic, social and cultural reforms,” Mustafa, who is head of the Change List, said.

Groups such as Change are hoping to capitalise on disenchantment with the ruling elite.

Hoda Abdel Hamid, Al Jazeera’s correspondent, reporting from Irbil, said: “Over the past two months that group [Change] has had a lot of success … it’s really concentrated more on domestic issues rather than only the national agenda of the Kurdish people.”

Fereydun Rafiq Hilmi, an independent Kurdish analyst who was a former deputy minister of transport and communications, told Al Jazeera: “In fact, if you say anything about Barzani or Talabani, or if you criticise their methods, you are likely to be threatened even if you are outside the country.”

He accused the administration of misusing public funds.

“The funds that are arriving in Kurdistan are going straight out again into their own bank accounts,” he said.

But Zagros Siwaily, a member of the KDP, defended the administration’s record.

“Due to the problems that we’ve had the administration has not managed to fully provide all of the services that the people need.

“Remember that in Kurdistan we’ve inherited a region in this part of Iraq that has gone under decades of under-investment and mismanagement by the previous regime,” he said, referring to the rule of Saddam Hussein, the former Iraqi president, ousted in the US-led invasion of Iraq in 2003.

During a visit to Washington on Thursday, al-Maliki noted that these tensions were among “the most dangerous issues that have been a concern for all the Iraqi government”.

But he said he expected to resolve the standoff, saying: “I am confident that we will be able to resolve all these issues not only with the Kurdistan region but also with other provinces.”

Final results in the election are not expected for several days as ballots must be collected in Irbil, the regional capital, before being flown to Baghdad to be counted.

Though Saturday sees the main vote, more than 100,000 Kurdish members of Iraq’s armed forces cast their vote on Thursday, along with police, prisoners and the sick. 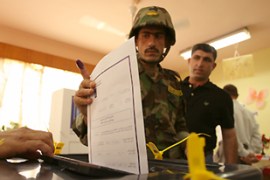