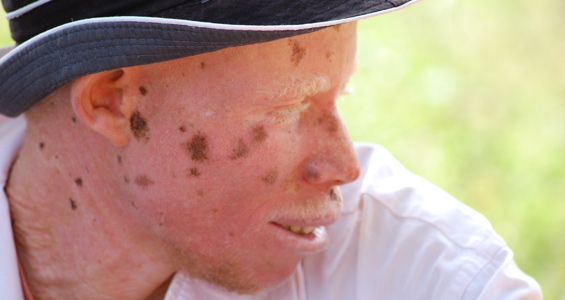 Jeremiah believes what is happening is a genocide that needs to be stopped [Y. Ndege]

In a small town in the East African nation of Burundi, a group of people live in fear of being savagely murdered at any moment. They are always on guard night and day maintaining shifts of who keeps watch.

These people are not criminals on the run but victims of mother nature.

They are among a dwindling number of albinos who have been in hiding since early 2009 when more than a dozen of them were slaughtered for body parts that are later sold to witch doctors for use in potions.

Arms, legs and genitals are the most valuable parts, fetching a lot of cash.

The witch doctors’ would-be customers fervently believe the potions concocted from albino body parts will bring them fortune in life, love and business.

I first broke this story on Al Jazeera in June 2008 when the gruesome trade entered the public spotlight after the killings of more than 50 albinos in neighbouring Tanzania.

Al Jazeera reported at the time how fishermen, traders and members of the business community working in and around Mwanza in northern Tanzania confessed to buying potions prepared with human body parts from witch doctors – and finding great success thereafter.

But now the trade in albino parts, which has led to the most profound and sadistic acts of violence, has spread to neighbouring Burundi.

I travelled to Ruyigi in Burundi, 200km from the capital Bujumbura, after albinos in Tanzania contacted me to tell me they had heard of body parts coming in to the area.

When a local fixer and I arrived in Ruyigi, we found that a trial against 11 people accused of taking part in the murder and trade of albino body parts had commenced.

The Burundian authorities explained to me that they were investigating the 11 suspects for allegedly planning to send the body parts abroad to Tanzania where they are high in demand.

I wondered what could be fuelling this cross-border trade. Could it be that so many of Tanzania’s albinos had been hunted down that they were now close to extinction? Or could the global economic crisis be fuelling demand among the poor, desperate and needy?

It could be any of the two. As I travelled deep into Ruyigi I met with locals who spoke of desperation and poverty – the average annual salary in this part of Burundi can be as low as $10 a year.

They described how albinos were living in safe-houses.

We found one such save haven and were met by a tall pink man with rough skin that looked as if it had been severely burned; there were tiny brown speckles all over his face.

We would come to know him as Jeremiah Ndayiragije. He was one of several albinos holed up in this dirty and decrepit hideout deep in the hills of Ruyigi.

Another was a man of 53 who had to abandon his family to seek refuge here.

We also found two siblings – a brother aged 17 and his sister, 8 who were hiding at the safe house, protected by their grandmother.

We explained that we were journalists from Al Jazeera English and wanted to hear their stories. Nothing could have prepared us for what we were about to hear.

Jeremiah began to tell us how one night his brother, Daniel, also an albino, was visited by their older non-albino brother, accompanied by a group of unfamiliar men.

That night Daniel was slaughtered by the older brother who sold his body parts for $240, Jeremiah later discovered.

“I saw my brother’s dead body. All his limbs, arms and legs, were chopped off and gone. Afterwards my brother and my sister-in-law were overheard fighting over the money they had received selling his body parts.

“Furthermore, we have evidence that the murderers came through my older brother’s compound and spent some time in his house discussing how they were going to kill him. I was lucky not be home at the time,” Jeremiah said.

Jeremiah’s non-albino brother then fled with the body parts, police suspect, to neighbouring Tanzania and has not been seen since.

Jeremiah’s sister-in-law, Victoria Nkuizikiye, was apprehended and is being held in prison on charges of murder, which she has denied.

Al Jazeera was granted special access to interview her in prison.

“No, I swear … that I was not involved in the killing of my albino brother-in-law. I am ready to be shot dead before my children as proof,” she said.

But the fact Victoria has not seen or heard from her husband since February means when the case comes to court – she is likely to be found guilty of complicity in murder.

Jeremiah and the other albinos living in hiding said they had lived in relative peace and stability before the albino body parts trade began in Tanzania.

They said they had not faced stigma, let alone potential attack because of what they call their “God-given skin condition”, until the horrific trade came to Burundi.

East African nations that have been the worst affected by violence against albinos, such as Tanzania, Burundi and Kenya, are working toward a system of measures to protect potential victims.

Tanzanian authorities recently called on the public to submit the names of suspected witch doctors and their clientele, but this has failed to halt the killings.

It appears as if the authorities have no plan in place on how to bring the murders to an end.

Meanwhile, albino associations are calling on East African governments to speed up the trials of those suspected of committing the murders and trading in body parts as a means of educating the public that such acts are punishable by law.

Members of the albino community are also calling on traditional healers associations to help curb the problem by enlightening members about the “evil” of trading in human body parts.

The feeling among albinos under threat is that the authorities should focus on eradicating the myths about the value of albino parts in witchcraft among people living in East Africa – instead of what they see as short-term protection measures.

But as those in power wrangle of what to do, every day is still a struggle mired in fear for hundreds of albinos in Burundi.

Jeremiah says the killings of albinos is a genocide that needs to be stopped before they are wiped out in East Africa.

“I cannot take the risk of going back home. I will not leave this place,” he said of the safe house.

“I would rather starve and die here than be hacked to death.”