Millions of people across Asia watched as the skies over the continent were pitched into near-darkness by the longest solar eclipse of the 21st century.

The eclipse began at 6:24am (00:54 GMT) on Wednesday in India before it was seen over Nepal, Myanmar, Bangladesh, Bhutan and China.

Over India, the Moon covered the Sun for almost four minutes, but in other parts of Asia the total eclipse lasted as long as six minutes and 39 seconds.

However, Amitabh Pande, a scientist with India’s Science Popularisation Association of Communicators and Educators, was still impressed by the event.

“It was still a unique experience with morning turning into night for more than three minutes,” he said.

One of the best views, shown live on several television channels, appeared to be in the Indian town of Varanasi, on the banks of the Ganges river.

Hindu priests conducted special prayers, while the crowds cheered and then raised their arms in salutation as the sun re-emerged from behind the moon.

Thousands of Hindus then took a dip in the Ganges keeping with the ancient belief that bathing in the river at Varanasi, especially on special occasions, cleanses a person’s sins.

“We have come here because our elders told us this is the best time to improve our afterlife,” Bhailal Sharma, a villager from central India, said.

But the gathering was marred by tragedy when a 65-year-old woman was killed and six people injured in a stampede at one of the river’s banks where about 2,500 people had gathered, Surendra Srivastava, a police spokesman, said.

Bad weather confounded many would-be eclipse viewers in China, with Beijing and Shanghai covered by a heavy blanket of cloud., but thousands of people still headed outside for the event.

“It is working hours now, but with such a spectacle going on, you don’t want to miss it. The experience is truly thrilling,” Allen Chen, a Shanghai office worker, said as the skies darkened.

Superstition has always haunted the moment when the Earth, moon and sun are perfectly alignedand the event has been associated with war, famine, flood and the death or birth of rulers.

The ancient Chinese blamed a sun-eating dragon for the eclipse, while in Hindu mythology, the two demons Rahu and Ketu are said to “swallow” the sun, snuffing out its light and causing food to become inedible and water undrinkable.

At a Buddhist temple in the Thai capital Bangkok, dozens of monks led a prayer service to ward off what they said would be ill effects of the solar eclipse.

“The eclipse is bad omen for the country,” Pinyo Pongjaroen, a prominent astrologer, said. “We are praying to boost the fortune of the country.”

Some expectant mothers in India asked doctors to advance or postpone births to avoid complications or a miserable future for their children.

The next solar eclipse with a “totality” – the period of time that the sun is completely covered by the moon – as long as Wednesday’s will take place in 2132.

But the next time the event will be visible will be on July 11, 2010 over the South Pacific. 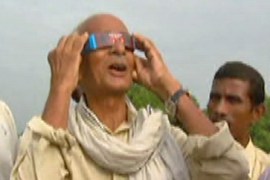 Video: The solar eclipse in India

Millions of people gather across Asia to witness the century’s longest solar eclipse. 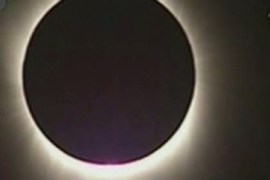 Millions of people have gathered across Asia to witness the longest solar eclipse of the 21st century.