The shooting took place on a highway connecting the Iranian border to Baghdad and southern Iraq.

Shia pilgrims, including Iranians, have often been the target of attacks during religious ceremonies in Iraq.

In April, nearly 60 Iranian pilgrims were killed near the same area.

Wednesday’s violence is the latest in a series of recent deadly attacks.

At least 23 people have been killed across the country in the past 24 hours, following a series of bombings on Tuesday in the capital, Baghdad, and the western city of Ramadi.

Violence had dropped significantly in recent months, but attacks reached a peak in the weeks before US combat troops pulled back from the centres of Iraqi major towns and cities.

An estimated 437 Iraqis were killed in June, the highest death toll in 11 months, and the near daily attacks have continued in July.

The violence comes as Nuri al-Maliki, Iraq’s prime minister, prepares to meet Barack Obama, the US president for talks on a range of issues including security.

The White House has said the talks will also focus on political reconciliation necessary for Iraq to make progress after years of war. 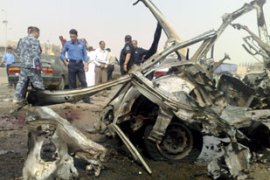 Series of explosions kills at least 18 people in Baghdad and western city of Ramadi.