The Russian government has provided “good co-operation” with the US administration in addressing issues with Pyongyang and Tehran, he said.

Obama is scheduled to leave next week on a trip to Russia, Italy and Ghana.

Rob Reynolds, Al Jazeera’s senior Washington correspondent, said: “Obama is clearly sending a message to the Russians and, particularly, Putin – someone who he has not yet met personally one to one.

“The perils of personal diplomacy are something that come up again and again in the US-Russia relationship, whether during the days of the Cold War between the US and the Soviet Union or more recently.

“When they first come into office, American presidents always say they are the one who can see clearly, and that the relationship with [Moscow] can be mended. It looks as though President Obama may be going down that path.”

Obama also said that a nuclear-armed Iran could spark an arms race in the Middle East, which would “a recipe for potential disaster”.

Western states have repeatedly expressed concerns that Iran is developing a nuclear programme with the sole aim of building an atomic bomb.

Tehran has denied that is working on a nuclear-weapons project and has said its programme is only geared towards producing electricity.

Obama also spoke about the presence of US troops in Afghanistan, saying that will he reassess whether to send more soldiers after the Afghan national elections in August.

The US is aiming to prevent Afghanistan from becoming a firm base for al-Qaeda, from which it can prepare for attacks on the US or its allies, he said.

Troops from the US and the Nato military alliance must provide help to Afghanistan’s security forces and assist in securing the Afghan-Pakistani border, he said.

Obama said that he has the right to change the US troop withdrawal timetable in Iraq, while expressing confidence that Washington will observe agreements made with Baghdad. 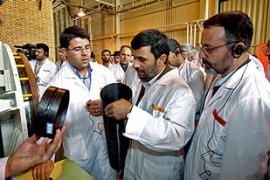 Iran urges US over nuclear crisis

Under pressure from the United States, Russia said today that one of the two nuclear power plants it is building in Iran has been cleared by the International Atomic Energy Agency.