Thousands of people protested against the rising cost of living and pay cuts in a public display of discontent over the country’s economic crisis earlier this year.

“The fall in GDP has led to a reduction of income without which expenses are not going to be revised. All this increases the risk of the budget deficit,” Piontkivski said.

He said the country could expect growth of one per cent in gross domestic product (GDP) in 2010.

But the country is experiencing some recovery, with analysts at Alfa Bank reporting that industrial output had risen 3.1 per cent in June from May.

The International Monetary Fun (IMF) released the second part of a loan package for Ukraine, expected to total $16.5bn, in May.

The IMF had forecast that Ukraine’s economy will contract eight per cent overall this year. 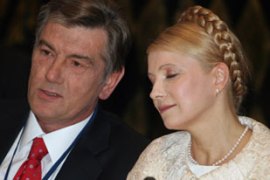 Up to 23 per cent fall expected in first quarter of 2009, president says. 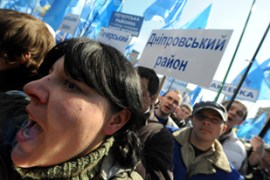 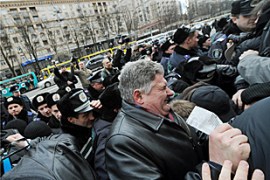 Thousands of people demonstrate in Kiev over price hikes and pay cuts.