“We expect an increase in coming days,” he told reporters at Charsadda, where 22 out of 247 families left for Swat.

Sebastian Brack, a spokesman for the International Committee of the Red Cross (ICRC), told Al Jazeera that there was a lot of uncertainty about what would await the displaced once they did return.

“The main concern is, of course, for their security and then the living conditions they will find when they get back there and, finally, whether their homes will still be intact,” he said.

“Living conditions are going to be difficult. Water and electricity have been restored to the main towns … but not the surrounding villages.”

The government has offered $300 of government aid to all those displaced by the fighting with the Taliban, which destroyed homes, facilities and crops.

Amir Haider Khan Hoti, the chief minister of NWFP, moved to reassure a group of returnees that the remaining Taliban fighters would be finished off.

Those who did return spoke of their joy at being allowed to go home.

“Thank God we’re going back,” Qaiser Khan, a farmer, said as he prepared to leave the Jalozai camp.

“I don’t know who’s right and who’s wrong. We want peace and if there are terrorists, miscreants, they should be eliminated once and for all.”

Sakhawat Shah, a 25-year-old student, told the AFP news agency after she arrived back at her home in Landakai: “Everybody is so happy. They are crying tears of joy.

“My room was destroyed in the shelling. My computer and books were also damaged, but I’m not worried because if I’m alive I can buy more books.”

Al Jazeera’s Imran Khan, reporting from Islamabad, said that the government was pleased with how the repatriation scheme was proceeding.

“What they are seeing is IDPs, refugees in their own country, going back to the Swat valley … and as they are going along their way they are being showered with flower petals and there is a very celebratory atmosphere,” he said.

The government has said that the process of returning the displaced will take more than a month.

Pakistan says that more than 1,700 Taliban fighters were killed in the offensive in NWFP but it is impossible to confirm the death toll independently and many analysts  suspect that the Taliban simply moved to other areas.

As the displaced began to trickle back to the region, the military continued its offensive against suspected Taliban positions in South Waziristan, also in the northwest of the country.

Pakistani jets pounded several locations along the border with Afghanistan on Sunday, as part of an ongoing military assault targeting Baitullah Mehsud, the head of the Pakistani Taliban.

“This isn’t so much about getting rid of the Taliban, it is about capturing or killing top Taliban leaders,” Al Jazeera’s Khan said.

“Once you have done that you give people the confidence to go back.

“Pakistan’s army is one of the strongest armies in the world and they are very confident, much like in the Swat valley, that they will be able to clear South Waziristan, but clearing an area is very different to actually holding one.” 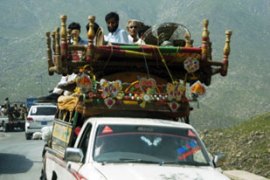 ‘No safety’ for Pakistan returnees

UN humanitarian chief says security remains an issue for those displaced by fighting.