In one attack, 12 federal agents were tortured and killed, execution-style, before being dumped by the side of a road.

Six federal police and two soldiers were killed in other attacks.

Felipe Calderon, Mexico’s president, has deployed about 45,000 soldiers and tens of thousands of federal police across the country in a crackdown on the drug trade.

A man who said that he was Servando “La Tuta” Gomez, La Familia’s leader, offered a pact with government during a call to the CB Television station in Michoacan on Wednesday.

Federal officials have not confirmed whether the caller was Gomez, but Fernando Gomez Mont, Mexico’s interior secretary, said: “The federal government does not ever dialogue, does not negotiate, does not reach deals with any criminal organisation.”

Federal police have arrested and charged eight mayors in Michoacan for allegedly helping the cartel, but Gomez Mont dismissed claims that police have targeted members of drug traffickers’ families.

At least 11,000 people have been killed as a result of the conflict between drugs cartels and the government since Calderon came to power in 2006.

Edgardo Buscaglia, director of the international law and economics of development centre at the University of Virginia, said Calderon’s policies were not working, given the dramatic rise in murders related to organised crime.

“It makes no sense to say that the policies are working when homicides related to organised crime have gone up from 1,500 in 2006 to more than 6,000 last year,” he told Al Jazeera.

“President Calderon has been relying on force – soldiers and police to engage organised crime.

“You need to dismantle the huge economic network – thousands of millions of dollars hidden within the legal economy of Mexico, Guatemala, Honduras, Ecuador, Venezuela that have been strengthening organised crime in Mexico.” 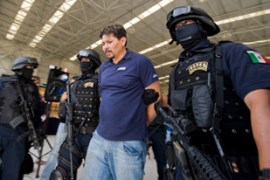 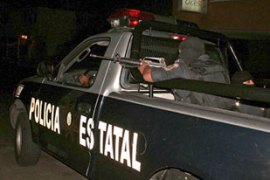 Two die in western state of Michoacan as security forces continue the war on cartels.