Mathias said that clashes began in Giro, a district in Ghazni, as Afghan and international troops pursued the fighters, who opened fire and the troops fired back.

The international troops also confiscated grenades, guns and ammunition found in a weapons cache during the operation, which the military said disrupted a Taliban cell.

Separately, the Afghan interior ministry said in a statement that two police officers were killed by a roadside bomb in the southern Kandahar district, near the Pakistani border.

Five others were wounded in the blast, the ministry said.

In Helmand, another southern Afghan province, at least two British soldiers were killed in separate attacks amid a US-led offensive in the region against the Taliban.

Afghanistan’s ministry of defence confirmed on Friday that the soldiers died on the previous day.

The first soldier was killed in an explosion while on foot patrol near the Nad Ali district, while the second died after sustaining a bullet wound.

Lieutenant-Colonel Nick Richardson, a spokesman for Task Force Helmand, said: “These fine British soldiers paid the ultimate sacrifice and their memory will live with us forever … We know that their deaths were not in vain.”

The British death toll has sharply increased since their forces launched their own major airborne assault against Taliban fighters last month.

The latest deaths bring the total number of British service personnel who died in Afghan operations since the war began in 2001 to 178 soldiers. 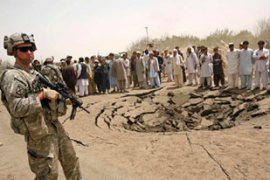 At least 15 students among 25 killed in explosion outside school in Logar province. 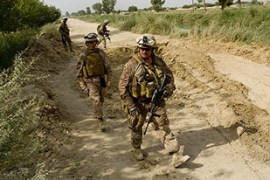 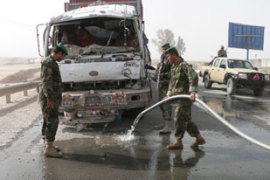 Toll of foreign troops climbs as a helicopter goes down in southern Zabul province.

At least six US soldiers killed in a series of blasts across the country.