Even before the official results were out, the March 14 coalition, named for the date of a protest that prompted the withdrawal of Syrian troops from Lebanon, declared victory, prompting street celebrations among its supporters.

“In terms of parliamentary seats the equation has not changed much between the Hezbollah-led opposition and the March 14th loyalists, yet the opposition, in the words of its own supporters, suffered  real defeat. The pro-opposition Al Akhbar daily called it an astounding defeat.

“Both the majority and the opposition expected the oppostion to win because there had been indications that the balance of power on the ground had changed in favour of Hezbollah and their allies.”

James Bays, Al Jazeera’s correspondent in Beirut, said two areas needed to be examined by Lebanon’s political parties in the wake of the result.

“First, is the idea of a veto [over cabinet decisions] for Hezbollah and its allies if they were to join a new government of national unity,” he said.

“That [veto] has existed for the last year, since violent clashes in Beirut last year led to a unity deal between political parties in Doha [the Qatari capital].

“If Hezbollah joins a new unity government they would like that veto retained – but March 14 have said that the people have spoken … and that they need to govern.

The other issue is that of who will become prime minister in any new government, Bays said.

“Saad Hariri wants the job, but others, including the Americans, have said privately that they would prefer the previous prime minister, Fouad Siniora, to stay on,” he said.

Michel Aoun, a former military chief and leader of the Free Patriotic Movement (FPM), which is allied to Hezbollah, conceded on Lebanon’s OTV that his party’s candidates had been defeated.

The win by the March 14 coalition had been by no means certain and it was thought the elections would be decided in Christian districts where Aoun’s candidates challenged other Christian competitors allied to the March 14 camp.

But Robert Fisk, a writer and journalist based in Lebanon, said that the Christian vote had not played as decisive a role as analysts had expected.

“The Christian vote did not seem to be as split as we feared it might be,” he told Al Jazeera.

“Aoun, I think, lost a lot of Christian votes, but got more Muslim votes, which is interesting.

“Aoun did have a lot of die-hard supporters at one stage, but I think his gradual flirtation with Syria, with Iran and with Hezbollah has really put a lot of his supporters off.”

While the March 14 bloc may have retained its grip on power, it now faces a battle to keep the divided country together.

“The elections once again led to a parliament of national divisions,” said the As-Safir newspaper, which is close to the Hezbollah-led opposition bloc, known as March 8.

Michel Sleiman, Lebanon’s president, expressed hope that a new national unity government would be formed, a prospect both sides have already raised.

“Its quite clear that Michel Sleiman, the president of Lebanon, is actually acquiring more power by playing this role as mediator between two sides,” Fisk said.

“At the end of the day there will have to be some form of coalition here. It’s not going to be winner takes all and the minorities sit mute in parliament waiting for the next election in four years time.”

Naim Salem, professor of international affairs and diplomacy at Notre Dame University in Beirut, also said that the March 14 coalition could not rule alone.

“There will be much negotiation going on in the coming days. I do not think that the March 14 can govern by themselves,” he said.

“But I don’t think that the March 8 will participate in this government without taking one third of the ministers in the cabinet to give them veto power. I think veto power will be the number one issue that will be contested between the two groups.”

Before the results were announced, police and soldiers moved out in force in sensitive areas, but no major security incidents were reported. 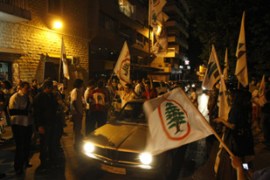 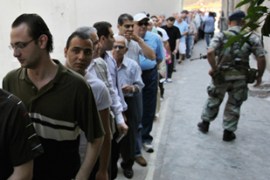