Ahmadinejad’s bid for re-election has been burdened by Iran’s stumbling economy and accusations from rivals that his foreign policies have left Iran isolated.

Mousavi, who was Iran’s last prime minister before the post was scrapped in 1989, said Ahmadinejad’s government “has undermined the dignity of our nation.”

“It has inflicted heavy damages on us and created tension with other countries,” he said.

Ahmadinejad, who opened the debate, said he and his government had faced sustained “attacks” from Mousavi and his supporters, who include former presidents Akbar Hashemi Rafsanjani and Mohammad Khatami.

“I have tolerated insults against me and my government over the past four years,” he said, adding that his position on the Holocaust has also been criticised by his opponents.

“I have my position on the Holocaust. The [Iranian supreme] leader approved it and it has the backing of the people.”

Earlier on Wednesday Ahmadinejad said that the Holocaust was a “big deception.”

Mahdi Karoubi, a former parliament speaker and Mohsen Rezaie, a former head of Iran’s Revolutionary Guard, are the other two candidates in June 12 election.

UN nuclear agency in Vienna hears from five aspirants for position of director-general. 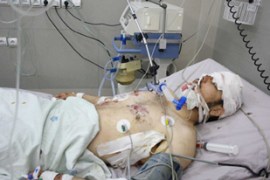 Three people including a child injured in shooting by armed men on motorcycles.