“I want those who would use terror against British citizens to know beyond doubt that we and our allies will pursue them relentlessly, and that they will meet the justice they deserve.”

Abu Qatada has been held in Britain since 2005 and is awaiting extradition to Jordan, where he was convicted of terrorism offences and faces life in jail.

Last month, the Algerian media reported that al-Qaeda in the Islamic Maghreb (AQIM) was demanding $14.21m in exchange for the Briton and another hostage, a Swiss national, being held in Mali. 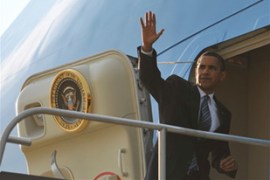 Al-Zawahiri calls US president a “criminal” as Obama prepares to address Islamic world.