He had pleaded guilty in March to counts of securities fraud, perjury and theft.

Victims of Madoff’s fraud included Hollywood celebrities, some of the world’s most famous banks and charities.

Many of the foundations were forced to close after Madoff’s rogue investment scheme suddenly collapsed.

Many of Madoff’s investors were also ordinary, elderly retired people who thought their life savings were in safe hands.

John Terrett, Al Jazeera’s correspondent in New York, said the long prison term for Madoff would be welcomed by many.

“I think Madoff’s victims will be reserved but quietly very happy about this. There are a lot of high-profile names [that have been defrauded by Madoff], such as film director Steven Spielberg, as well as a number of companies, charities and pension funds.

“But the vast majority of the 13,500 victims were individuals who did not have a lot of money – remember that in the United States having a couple of million dollars in a pension scheme does not go that far.

“We heard from lots of people inside the courthouse today, who gave us stories that were very sad.”

Madoff told the court in March that the billions of dollars which passed through his hands during his 30-year scam were never invested in markets.

Instead, he stored the funds in a Manhattan bank account.

The funds were then used to pay out “dividends” to investors in what is known as a “Ponzi scheme”.

Prosecutors say about $13bn was handed to Madoff.

The financier has referred to losing about $50bn, believed to be the amount that would have been paid out had the funds been properly invested.

The sums were bigger than the gross domestic product of countries such as Luxembourg and more than the external debt of several African nations.

Madoff’s sentencing comes after a judge last week issued a preliminary $170bn forfeiture order stripping him of all his personal property.

The order forces Madoff to forfeit assets including a $7m apartment in Manhattan, an $11m house in Palm Beach, Florida, and a $3m home located in New York’s borough of Long Island.

The government also settled claims against Ruth Madoff, the financier’s wife, who must also forfeit her interests totalling $80m in property which she had claimed were hers, prosecutors said.

Besides an accountant, no one else has been criminally charged in the scam.

But Madoff’s family, including his wife, and brokerage firms who recruited investors, have come under intense scrutiny by the US Federal Bureau of Investigation (FBI), regulators and a court-appointed trustee overseeing the liquidation of his assets. 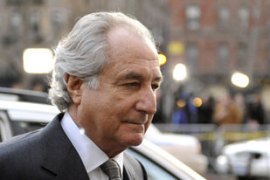 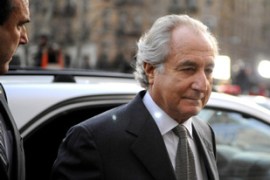 Disgraced US financier who could spend rest of life in jail says he is “sorry and ashamed”. 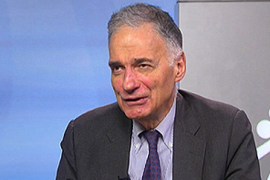