The process, which had been televised earlier, coincided with Iraq assuming formal control over its cities, a step towards ending the United States’ combat role in the country.

A total of 32 firms, including US and European giants ExxonMobil and Shell and companies from China, India and other Asian states, have been chasing the opportunity to get 20-year service contracts to develop Iraq’s resources.

The government was hoping the high-profile licensing round would help bring in foreign expertise to the country’s energy industry, which is looking to boost output of a resource that provides 90 per cent of the government’s revenues.

Some analysts have said the companies may have been unwilling to commit to major ventures, opting to wait and see how the security situation develops after the US pullout from urban areas.

Under the service contracts, the bidding companies would be paid a per barrel fee for any crude they produce in excess of a minimum production target.

In the original bids, all deals were rejected by the Iraqi government, apart from the BP-led consortium.

A consortium made up of ConocoPhillips, CNOOC and Sinopec was the only bidder for the 2.4bn barrel Bai Hassan field in the Kirkuk region in the north.

But ConocoPhillips, which bid $26.7 per barrel for output over the minimum, refused to match the ministry’s estimated per barrel payment of about $4, said Hussain al-Shahristani, Iraq’s oil minister.

CNOOC led a consortium that was the only bidder for the Missan fields, comprising three adjacent fields offered as one bloc.

But the Chinese firm, which had bid $21.4 per barrel, refused to match the government’s $2 per barrel price.

A Shell-led group – which included Sinopec, CNPC and Turkish Petroleum – offered a price of $7.89 per barrel for the Kirkuk field, while the government said it was willing to pay only $2 per barrel.

No bids were offered for the Mansouria field.

Officials had earlier said that any fields not agreed on would be re-offered in subsequent rounds.

But al-Shahristani said the offers on Bai Hassan and Missan would “be taken to the cabinet for further instructions”.

Analysts have said the bickering could further unsettle international oil companies already worried about Iraq’s lack of a new national oil law and the government’s argument that deals struck independently with the semi-autonomous Kurds in the north are illegal.

A consortium of British giant BP PLC and China’s CNPC was the only successful bidder.

Its offers for the Rumaila oil field, which holds 17.8bn barrels in crude reserves, beat off competition from US giant Exxon Mobil and Malaysia’s Petronas.

The Exxon Mobil-led consortium requested $4.8 per barrel for production over the minimum and BP wanted $3.99 per barrel, al-Shahristani said.

The ministry was willing to pay $2 per barrel.

BP agreed to match the ministry’s price and won the contract, with Exxon Mobil refusing to revise its bid.

Rounding out the list of worries is Iraq’s perennial security problems.

Nuri al-Maliki, Iraq’s prime minister, said at the start of the day’s ceremony that the government would “offer security protection, offer all guarantees for their investments and offer all the facilities needed to ensure the success of this process”.

Al-Shahristani has borne much of the criticism for Iraq’s production problems, with some pointing to the country’s inability to even reach its pre-war production levels as evidence that he has failed.

The minister, however, has insisted he was working for the country’s best interest.

Iraq has about 115bn barrels in crude, among the world’s largest deposits, and the fields on offer account for roughly 43bn barrels of those reserves.

Iraqi officials have estimated that based on crude oil at $50 per barrel, the companies could earn around $16 bn in total.

Iraq, meanwhile, would get over $1.7 trillion. 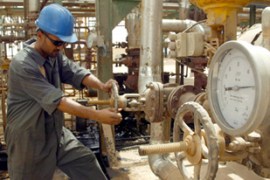