At least 20 people have been killed in a series of mass protests after reformist candidates complained that the re-election of Mahmoud Ahmadinejad, the president, had been rigged.

In the latest reported violence, police used tear gas and batons to break up a protest by about 3,000 people in northern Tehran on Sunday, The Associated Press news agency quoted witnesses as saying.

The reports could not immediately be independently verified because of the restrictions imposed on journalists in Iran.

The semi-official Fars news agency reported that the eight British embassy employees “had a considerable role in recent unrest”.

“This group played an active role in provoking recent unrest.” it said.

Al Jazeera’s Jonah Hull in London, quoting British embassy officials in Tehran, said the arrest of the embassy staff had taken place over the course of the last two weeks.

“This is a sort of running total – if you like – of a number of arrests and detentions of British embassy employees believed to be local Iranians rather than British citizens,” he said.

“All of this comes off the back of two weeks of quite strident accusations against Britain with the supreme leader [Ayatollah Ali Khamenei] calling Britain ‘the most evil of all western powers’ in terms of its involvement and interference in Iranian affairs.”

Iran has repeatedly accused Western powers – mainly Britain and the US – of inciting the street protests.

The European Union agreed on Sunday that any future “harassment and intimidation” of its diplomats should be met with a “strong, collective response”.

“The EU calls on Iran and its authorities to stop hostilities against EU member states as well as [the] EU’s partner countries and their citizens and to release an EU journalist still in custody,” Jan Kohout, the Czech foreign minister, said.

Ayatollah Ali Khamenei, Iran’s supreme leader, has insisted the protests must stop and vowed not to give in to the protesters.

But both Mir Hossein Mousavi and Mehdi Karroubi, the two reformist candidates, have continued to insist that the presidential election was marred by fraud.

They have also rejected a proposal for a recount of some ballots by the country’s highest legislative body, the Guardian Council.

Akbar Hashemi Rafsanjani, a former president and supporter of Mousavi, has called for a fair and thorough examination of complaints about the election.

“I hope those who are involved in this issue thoroughly and fairly review and study the legal complaints,” he said. 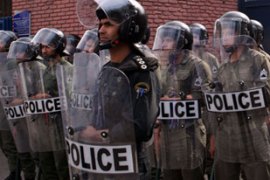