Ghaith Abdul-Allah, 35, who was unloading motorcycles he planned to sell from his lorry when the blast occurred, said: “I saw a ball of fire and some motorbikes were lifted about 10 metres into the air.

“When the smoke from the explosion vanished, I saw a large number of young men lying on the ground soaked in blood.

“There were others who were screaming and crying for a lost brother or a friend,” he said.

The blast also came two days after more than 70 people died in an attack at a market in Baghdad’s Sadr City area.

Reporting from Irbil, Al Jazeera correspondent Hoda Abdel Hamid said: “There has been an increase in the number of attacks lately, specifically these high profile attacks that we haven’t seen in a long long time.

“Iraqi and US militaries have been warning that as we reach the 30th deadline – when all American troops should be out of urban areas – there will be more attacks and that is what we are seeing.

“Quite troubling is that the attacks in Sadr City, which killed more than 70 people, happened in an area where Americans had just evacuated and handed over security to the Iraqi security forces.

“So that raises a lot of questions and also the level of anxiety for the Iraqi people over what would happen once the Americans go back to their bases.”

US forces are also due to withdraw from all cities and major towns of Iraq by the end of June, including Mosul and Kirkuk, where violence levels remain persistently high.

A “small number” of US troops would be left in some Iraqi cities after the June 30 deadline at so-called Joint Security Stations to train and advise local security forces, a military spokesman said.

The US military will also continue to provide intelligence and air support.

“This is a huge moment for Iraq, for the US it is like taking the stabilisers off the Iraqi bike and seeing how the Iraqi institutions that they have created can endure,” James Denselow, a Middle East security analyst at King’s College London, told Al Jazeera.

“The results are very mixed … there are lots of success stories, but the stories that are not so successful are the real dangers here.

“If we look at the city of Mosul, where much of the recent violence has been focused on, then we see a real flashpoint that could be a spark, both for further sectarian conflict and possibily even ethnic conflict between Kurdish and Arab forces.”

Nuri al-Maliki, the Iraqi prime minister, has insisted the country’s security forces were capable of protecting citizens after US forces pull out.

“We assure you of Iraqi forces’ readiness for the mission, despite some security violations, and we assure you that we are now more stable and steady,” he said.

Louay Bahry, an Iraq analyst at the Middle East Institute, told Al Jazeera: “The Iraqi government, after the Americans pull out, needs to reactivate the process of national reconciliation between Sunni and Shia and all the political groups; that national interest should come before any other interests.

“The Iraqi government needs to rediscover its Arab identity and establish better ties with the Arab world,” he said.

On Thursday, two people were killed and 31 more wounded when two bombs went off within hours of each other at a bus station in the southeast of Baghdad.

In the east of the Iraqi capital, nine US soldiers were wounded when two roadside bombs hit their patrol, the US army said.

Three of the officers died when a homemade bomb targeting a police patrol went off, while the fourth died in a drive-by shooting at a security checkpoint.

An Iraqi soldier was also killed and 13 people wounded, including four other troops, by a car bomb near the city of Mosul, a police official said.

The wave of violence comes just days after the US military formally handed control of Baghdad’s Sadr City area, the scene of Wednesday’s bombing, to local forces. 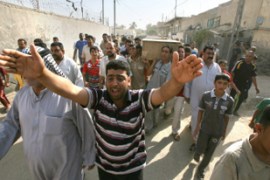 Series of fatal attacks come as funerals are held for victims of Baghdad market bombing. 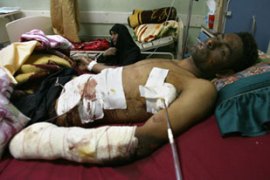 Sadr City rocked by bombing just days after US hand over control to Iraqi forces. 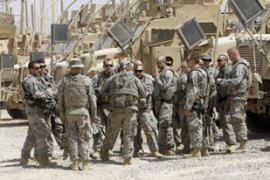