Tehran, the Iranian capital, has seen unrest and near-daily street protests since results of the vote were announced on June 13.

The Iranian authorities rejected calls by world leaders to end crackdown on protesters and accused them of meddling.

They lashed out at  Ban Ki-moon, the UN secretary general, over his call for an immediate end to the use of force against civilians and respect of civil rights in dealing with the protests.

Hassan Qashqavi, a foreign ministry spokesman, was quoted by the ISNA news agency as saying: “Mr Ban Ki-moon, under the influence of some powers, is ignoring the realities of Iran’s election and his remarks are clearly contradicting his duties … and are a clear interference in Iran’s state matters.”

“Ban Ki-moon has damaged his credibility in the eyes of independent countries by ignorantly following some domineering powers which have a long record of uncalled-for interference in other countries’ internal affairs and colonisation,” Qashqavi said.

In a statement a day earlier, Ban had called on Iran’s government “to respect fundamental civil and political rights, especially the freedom of expression, freedom of assembly and freedom of information”.

Also on Tuesday, Britain announced it was expelling two Iranian diplomats after Iran forced two British diplomats to leave in an escalating spat over post-poll protests.

“In response to that action, we informed the Iranian ambassador today that we would expel two Iranian diplomats from their embassy in London. I am disappointed that Iran has placed us in this position,” he said.

Besides criticising the UN, Tehran has also accused the US and Britain of seeking to interfere in Iran’s internal affairs.

Mahmoud Ahmadinejad, the incumbent conservative president, won the election by a wide margin, with 63 per cent of the vote, according to figures from Iran’s interior ministry.

The ministry said Mir Houssein Mousavi, a reformist candidate, received only 34 per cent of the vote.

Mousavi and his supporters have alleged voter fraud and widespread irregularities, and demanded the vote be annulled.

Ayatollah Ali Khamenei, Iran’s supreme leader, called for an end to the unrest earlier in the week, and warned of harsh consequences if the civil unrest continued.

Despite that and a warning by Iran’s Revolutionary Guard, an elite military unit, that it would crush further protests, hundreds of anti-government demonstrators gathered in central Tehran on Monday afternoon before being dispersed by police and security forces.

Hundreds of protesters have been arrested since the unrest began and a special court has now been set up to deal with them.

Ebrahim Raisi, a senior judicial official, was quoted by state-run radio on Tuesday as saying the demonstrators “must be dealt with to set an example”.

“The judiciary will do that,” he said.

Mousavi supporters, meanwhile, have been calling for a general strike on Tuesday, including in Tehran’s main bazaar.

However, Alireza Ronaghi, Al Jazeera’s correspondent in Iran, said the bazaar’s shopkeepers were reluctant to join a widespread strike.

“First of all, these are businessmen we’re talking about … for them, business always comes first and unrest and strikes are always bad for business,” he said.

“Second, Tehran Bazaar is the conservative camp’s economic stronghold and it’s not easy for anyone in the bazaar – even though they might be a supporter of Mousavi – to close up shop in the face of other colleagues who do not approve of such an act.”

He added that while the enthusiasm of the protesters has continued, the form it takes will have to change in the face of a harsh government crackdown on street protests.

At least 19 people have died in the unrest that has followed the election, according to government sources. Unofficial estimates range from between 50 and 150.

Mehdi Karoubi, one of the defeated presidential candidates, has called for a nationwide day of mourning.

“Karoubi calls on Iranians around the country to hold ceremonies on Thursday to remember those [killed] at protests,” Reuters news agency quoted an aide of Karoubi as saying.

Hadi Ghaemi, a rights campaigner from the International Campaign for Human Rights in Iran, told Al Jazeera that the government’s use of violence against protesters is only fuelling discontent.

“Neda [Soltani] and the pictures of her very last moments will become a huge symbol of these protests,” he said, referring to an online video which alleges to show an Iranian woman dying after being shot by a member of the Basij militia.

“It will become the collective memory of the Iranian people for what happened over the past few days … [and] that is the kind of thing that the government cannot repress.” 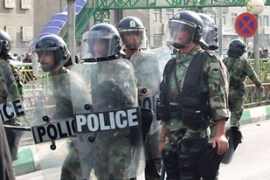 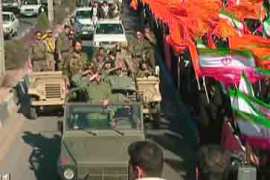 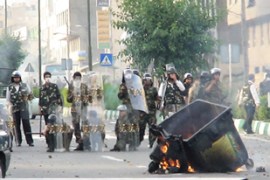 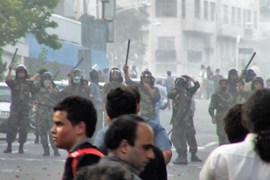 Lockdown on streets of Tehran as signs of struggle emerge among ruling clerics.