In a message posted on his website, Mousavi asked his supporters to “exercise self-restraint”.

Despite the warning, opposition supporters were in evidence on the streets in Tehran, some carrying Mousavi’s picture, raising the possibility of further clashes.

Sadegh Zibakalam, an Iranian political analyst, said that the government had arranged Tuesday’s protest in response to the anti-government movement.

“The government doesn’t want to appear as being too soft – that’s why they called this rally today and asked its supporters to come to the square where Mousavi’s supporters had decided to gather,” he told Al Jazeera.

“By arranging these crowds the government is making two points. It wants to demonstrate that it is firm in dealing with this crisis, [and] on the other hand they have been called [on] by the pro-government crowd to crack down.

“In a sense it is a justification for the seven people who were killed last night.”

The rally comes just hours after Iran’s powerful Guardian Council said it could order a partial vote recount if it found irregularities.

The legislative body has ruled out annulling the disputed poll, but the Council’s move appears to be a first concession by authorities to the protest movement.

A spokesman for the Council, a 12-member group of clerics and Islamic law experts as a constitutional watchdog, said only that it was “ready to recount the disputed ballot boxes claimed by some candidates, in the presence of their representatives”.

“It is possible that there may be some changes in the tally after the recount,” Abbasali Kadkhodai, a Council spokesman said.

“Based on the law, the demand of those candidates for the cancellation of the vote, this cannot be considered,” he told state television.

Iran has grown increasingly sensitive to how the world views the heightened tensions and authorities have restricted reporting by journalists working for foreign media.

“No journalist has permission to report or film or take pictures in the city,” a culture ministry official was quoted by the Reuters news agency as saying.

Iranian state television said earlier that the “main agents” in post-election unrest had been arrested with explosives and guns.

Gholamhossein Mohseni-Ejei, Iran’s intelligence minister, said his ministry was chasing two categories of people seeking to create instability in Iran, one of them backed from abroad.

“One wanted to achieve its goal through explosions and terror and in this connection 50 people were arrested and more than 20 explosive consignments were discovered.

“They were supported from outside the country,” he said on state radio.

“The second category was made up of counter-revolutionary groups who had penetrated election headquarters [of the election candidates] … some 26 such elements have been arrested.”

Despite the upheaval in Iran, Ahmadinejad travelled to Russia for a meeting of the Shanghai Co-operation Organisation, his first foreign trip since official results showed he had secured a second four-year term. 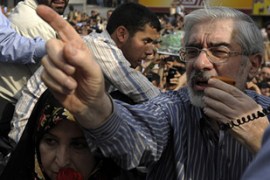 Body says it will order a recount if irregularities are found in balloting. 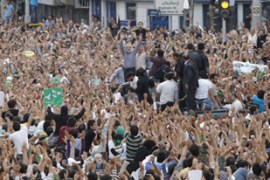 Mousavi tells tens of thousands of supporters he will stand if new polls are called. 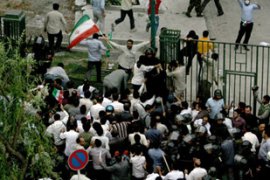 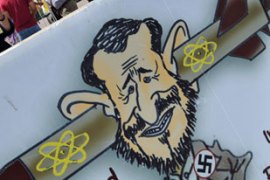