Washington considers Pakistan’s tribal region, of which South Waziristan is a part, a hideout from where al-Qaeda and Taliban fighters attack US forces in Afghanistan.

The US has frequently targeted South Waziristan with missile strikes and neighbouring North Waziristan, also a target for drone attacks, could well also fall under a new Pakistani military offensive at some point.

“Baitullah Mehsud is the root cause of all evils,” Ghani said in Islamabad.

“The government has decided that to secure the innocent citizens from terrorists, a meaningful, durable and complete action is to be taken.”

Ghani suggested the operation had already begun, though the military has insisted its recent attacks on fighters in South Waziristan were retaliatory, not the launch of a new offensive.

Two intelligence officials said the army and Taliban were fighting in the Spinkai Raghzai area of South Waziristan as Ghani made the announcement.

“We will give a comment after evaluating the orders,” he said.

Mehsud has been blamed for the killing of Benazir Bhutto, a former prime minister, assassinated at a rally in December 2007, though he denies the accusation.

He also has been linked to bombings on both sides of the Afghanistan-Pakistan border.

Al Jazeera’s James Bays, reporting from Islamabad, said it was not a suicide bombing.

The bomb was planted in a rickshaw in the very busy market area and appeared timed to kill as many people as possible, he said.

Many of the recent bomb attacks have been claimed by Taliban leaders, who say they are taking revenge for the military offensive against them across the northwest. 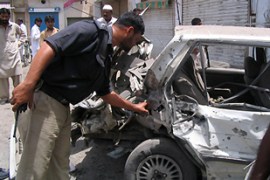 Blast hits Dera Ismail Khan in the northwest, where troops are battling the Taliban. 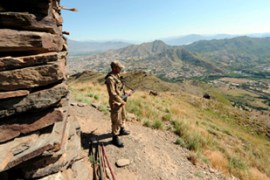