“It’s the Houthi group’s style to perpetrate such an act of abduction of foreigners,” it said.

“There are ongoing efforts exerted by the ministry of interior and Saada province security institutions for the release of the hostages. We are working together on it and hope they will be released soon.”

But a rebel spokesman denied any involvement in the incident.

“It is a government conspiracy to tarnish the Houthis’ reputation … It has never happened that a member of the Houthi followers committed such a shameful act,” the spokesman said.

The incident comes after Yemeni rebels released a group of 24 local and foreign medical workers they abducted from a hospital in the north of the country.

The doctors and nurses were released unharmed on Friday, after the rebels received assurances that two prisoners would be released in return.

The medics, most of whom were Yemenis but also included one Egyptian, two Indians and two Filipinos, had been abducted just one day earlier in the northern Saada region.

Saada was the site of an anti-government uprising led by the Houthi family in 2004.

The tribesmen cited alleged economic and religious discrimination as the reason for their armed campaign.

Most foreigners abducted in Yemen are released unharmed, but in 2000 a Norwegian was killed in crossfire and in 1998 four Westerners were killed during a botched attempt to free them. 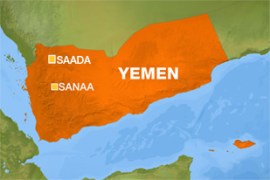