The Maoists’ move to sack Katawal, who they accuse of disobeying orders orders to halt army recruitment, has yet to be approved by the president.

“This will all depend on what he [the president] will decide,” Ajaya Bhadra Khanal, editor of the Himalayan Times newspaper, told Al Jazeera.

“[We don’t know] Whether he will endorse the recommendation of the cabinet or he will offer them another suggestion, or way out.”

Opposition officials said that a meeting of all political parties, excluding the Maoists, was scheduled for later in the day.

Al Jazeera’s Subina Shrestha said the developments could lead to the government’s collapse.

“Without the UML the Maoists do not have a majority,” she said. “And there is a chance that the other parties in the coalition might back out.”

The dispute between the army and the Maoists focuses on Maoist demands that their former fighters, currently confined to UN-supervised camps as part of a 2006 peace agreement, be fully integrated into the regular army.

But the army is refusing to take in Maoist fighters who it views as being politically indoctrinated.

Concerns have grown over what the dispute will mean for the peace deal, which brought the Maoists into the political mainstream and ended their decade-long “people’s war”.

The Maoists won landmark elections last year and forced the abdication of the king.

Since then they have been pushing to finalise the peace process by having their former fighters incorporated into the national army.

But the army, a bastion of Nepal’s former ruling elite, accuses the Maoists of not fulfilling their commitments to return property grabbed during the civil war and disband its youth wing, the Young Communist League. 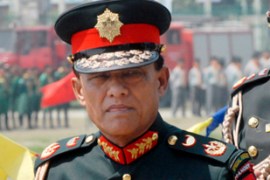 Analysts fear dispute with the army could endanger peace deal.