Jabbar has not shown up for work at the Grain Board, since then, a trade ministry source said.

It said it was co-operating fully with the judiciary and denied reports it had refused to hand over officials to Iraqi forces who came to detain them last week.

An official at Iraq’s Integrity Commission, the government anti-corruption office, said on condition of anonymity that the commission sent its forces to the trade ministry last Wednesday to serve warrants to nine officials charged with corruption.

Ministry sources said warrants had also been issued for the official who heads the internal oversight section and the most senior official responsible for food imports.

In 2006, Iraq banned wheat imports from Australia when its then-monopoly exporter AWB was found to have paid kickbacks to Saddam Hussein’s government for wheat deals.

The Grain Board imports millions of tonnes of wheat and rice each year. It says it has taken steps to improve its transparency.

In other news from Iraq, government and US forces arrested three leading members of a Sunni armed group on suspicion of carrying out attacks – including downing a US military helicopter – before they switched sides, Iraqi officials say.

The three Awakening Council leaders detained on Saturday include Mullah Nadhum al-Jabouri, a prominent tribal militia figure in the area around Duluiya, about 75km north of Baghdad.

His two brothers also were taken into custody in the US-Iraqi raid, Iraqi officials said.

The three are accused of carrying out attacks in 2005 and 2006, including the attack on the US helicopter and targeting an Iraqi police station near Duluiya, the officials said.

A US military statement did not mention specific allegations against the three but said al-Jabouri and his brothers were wanted for “terrorism”. 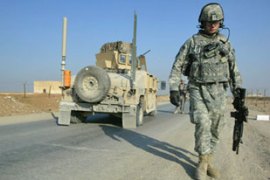 Iraqi kills US soldiers in Mosul

Two Americans shot dead and three others injured by man said to be imam of a mosque.

Foreign Minister Alexander Downer has backed a second inquiry into Australia’s pre-war intelligence on Iraq’s weapons of mass destruction (WMD) ahead of the first inquiry report.

Life before and after sanctions

History may have never recorded a harsher and more inhuman regime of sanctions than those imposed on Iraq in the name of the UN. It obliterated people’s lives and crippled their economy. The following figures attest to that heart-breaking reality beyond any doubt.