“Saudi Arabia, Kuwait, Qatar and Bahrain are committed,” the source, who spoke on condition of anonymity, said.

“Monetary union will be weakened but it is also a loss for the UAE because it is losing a competitive advantage of being part of a bloc.”

Simon Williams, a regional economist at HSBC in Dubai, said that the UAE’s decision was unlikely to herald changes to the emirate’s monetary policy.

“I don’t think it signals a change in currency regime, or disagreement over the maintenance of the dollar peg,” he said.

All the Gulf states peg their currencies to the dollar, with the exception of Kuwait which abandoned its dollar peg in 2007.

Even so, Kuwait has pledged to join a viable joint monetary policy.

The Gulf states had planned to converge their economies ahead of plans to introduce a single regional currency.

But the UAE said it was uneasy over a May 5 decision to base the joint central banks in Riyadh, the capital of Saudi Arabia.

“I think [the UAE withdrawal] is more a statement of protest over the decision that was taken on choosing Saudi Arabia,” Mohammed Yasin, chief executive at the UAE’s Shuaa Securities, said.

“It is more over the way it was chosen, not where it was chosen … I don’t think it will have any affect on the economy or the stock markets.”

The choice of Saudi Arabia as the host country for the joint central bank was interpreted by analysts as a sign that the Gulf region’s largest economy was trying to regain influence it had lost to the UAE.

The UAE has in recent years risen to international prominence, with Dubai becoming a key trade and tourism hub. 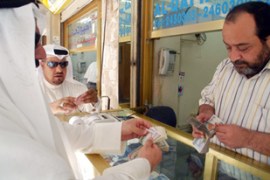 Central bank switches to ‘basket’ of currencies after dollar falls in value.