“Her continued detention, and now this latest trial, breach international standards of due process and fair trial.”

Security forces took Suu Kyi, who has been under house arrest for most of the last two decades, from her lakeside home on Thursday after an American man swam to her lakeside residence.

“The Myanmar authorities might claim Aung San Suu Kyi has breached the conditions of her detention, but they have broken both their own laws and their international human rights obligations,” Pillay said.

“She should not be detained in the first place.”

The US, Britain and the European Union, as well as human rights groups, have all criticised the government’s treatment of Suu Kyi and the new charges.

Gordon Brown, the British prime minister, said the “regime is clearly intent on finding any pretext, no matter how tenuous, to extend her unlawful detention”.

Suu Kyi’s house arrest was due to expire on May 27.

In Washington, Hillary Clinton, the US secretary of state, called the new charges “baseless” and said she would raise the issue with China and other Southeast Asian countries.

“We call on the Burmese authorities to release her immediately and unconditionally along with her doctor and the more than 2,100 political prisoners currently being held,” she said.

Singapore’s government has said it is dismayed by the charges against Suu
Kyi, while Anifah Aman, Malaysia’s foreign minister, called for a “process of
engagement” by outside countries.

Suu Kyi’s trial is expected to start on May 18.

The 63-year-old has so far been detained without trial for more than 13 of the last 20 years, with the military refusing to recognise her National League for Democracy (NLD) party’s landslide victory in the country’s last elections in 1990.

Zin Linn, the director of the National Coalition Government of the Union of Burma, a pro-democracy group that supports Suu Kyi, told Al Jazeera that there was an “ulterior” motive to the trial.

“They are finding fault with her to extend her detention because they didn’t allow her to participate in the election, that is their main intention,” he said, calling the military’s move “very cunning and crooked”.

“She was under house arrest. Any security measure was taken by the authorities, so whoever [enters] into the compound of a resident, the responsibility is upon the authorities, not upon her,” he said.

The military government has in the past found various reasons to extend her periods of house arrest.

John William Yettaw, the American at the heart of the new charges is alleged to have swum across Inya Lake using a pair of home-made flippers and spent two days in Suu Kyi’s home.

He did not explain his actions to US diplomats during a brief meeting this week, but speculation about his role is rife on the streets of Yangon.

“I think the regime must be behind this incident one way or another. They do not want to free Daw Suu,” said a retired politician, using the Burmese honorific for older women.

Mie Mie, a newspaper seller, said: “Whatever motive he had, he’s made the mess in our country more complicated. We just can’t stand the sight of his picture.”

Others were angry at what they called a “publicity stunt” by a troubled man. 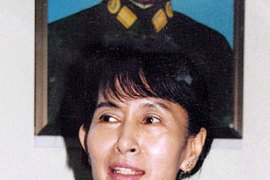 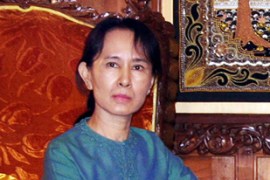