According to diplomats privy to continuing talks, this is attributed to China, Russia, Libya and Vietnam voicing concern about further alienating and destabilising North Korea.

China, the North’s closest ally, and Russia hold veto power as permanent members and could dilute any response.

Meanwhile, the Japanese government has vowed to “keep pushing” for UN action to punish North Korea for the rocket launch.

North Korea fired its rocket over Japan on Sunday, claiming it launched a communications satellite into orbit.

But the US, South Korea, Japan and others suspect the launch was a guise for testing the North’s long-range missile technology.

Hillary Clinton, the US secretary of state, also commented on North Korea’s rocket launch saying that the United States is “joined by many countries in denouncing the actions of North Korea, it was in our view a clear violation of Security Council Resolution 1718”.

Clinton called the launch “a provocative act that has grave implications”.

North Korean officials continue to praise what they view as the successful launch of the rocket.

Speaking on state television, Choi Jang Gun, the chief director of North Korea’s science and technology committee, said Pyongyang had shown the world that when technology is made well and combined with courage, it can be successful.

Choi Bae Jin, the chief director of the North Korean national planning committee, also said: “We cannot hide our joy and excitement over this achievement.”

Photos released by the Korean Central News Agency purportedly show Kim standing with scientists and technicians involved in the launch at the general satellite control and command centre. 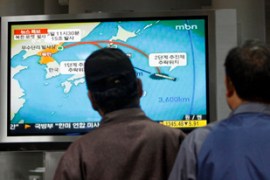 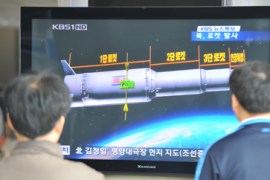