The initial post mortem recorded he died from a heart attack.

The investigation will look into whether contact with officers contributed to his death, the IPCC said.

Deborah Glass, the IPCC deputy chair, said: “People are rightly concerned about this tragic death and this footage is clearly disturbing.”

Glass said the probe was currently focused on identifying the officers in the footage.

“Several have already come forward and all efforts are being made to trace those who haven’t,” she said.

Opposition parties in the UK expressed anger at the footage.

The Liberal Democrat party called the incident “sickening” and the Conservative party also joined calls for a criminal investigation.

The video, filmed by a New York fund manager who was in London on business, shows Tomlinson walking alone with his hands in his pockets in front of a line of police officers, some with dogs and others equipped with riot helmets, shields and batons.

One officer appears to lunge at Tomlinson from behind, hit the backs of his legs and then push him, sending him sprawling on the ground.

Tomlinson is then shown sitting up and apparently remonstrating with the officers, as bystanders came to his aid.

Minutes later he collapsed in a nearby road.

Police attempted to resuscitate him before he was taken by ambulance to hospital where he was pronounced dead.

“Ian clearly had his arms in his pockets and back towards the police. There is no need for them to step in towards him,” Tomlinson’s son Paul King was quoted by newspapers as saying.

“[The video] clearly shows that Ian did have an altercation. Now we can say, ‘yes he did.’ Up until now it has been ‘if’. But now we’ve seen it, we want answers.”

Liberty, a UK-based human rights group, called for policing at public protests to be closely scrutinised.

Shami Chakrabarti, Liberty’s director, said: “Clear images of an armoured policeman assaulting an innocent bystander from behind impugn the whole attitude to policing protests by the Metropolitan Police”

“The images that have now been released raise obvious concerns and it is absolutely right and proper that there is a full investigation into this matter, which the Met will fully support,” said Sir Paul Stephenson, the head of the Metropolitan police. 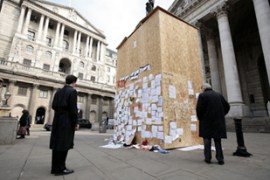 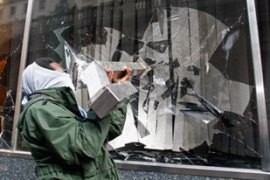 Demonstrator collapses amid protest by thousands of people on eve of world summit. 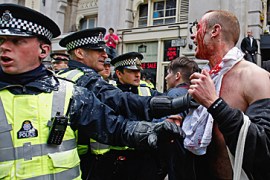 Activists scuffle with police amid anger over the global economic crisis.