The so-called “Red Shirts” say Abhisit – who was appointed by the country’s parliament in December – took power illegitimately and should step down in order for parliament to be dissolved ahead of fresh elections.

The anti-government rallies have posed the biggest challenge to his government to date.

A potential flashpoint arose when the protesters surrounded the house of Prem Tinsulanonda, the Thai king’s senior adviser.

Thaksin accuses Prem of orchestrating the coup that toppled him in 2006. The accusations against Prem have broken a major taboo in Thai society, where the royal family is revered.

Dozens of soldiers stood guard outside the building.

Al Jazeera’s Divya Gopalan, in Bangkok said: “The city is under very tight security. There are about 5,000 soldiers on standby and 2,500 police on the streets.

“Roads have also been blocked to try and stop people from the provinces from coming in – because Taksin’s main power base was in the rural area.”

Abhisit told protesters that any violence would be dealt with firmly and rejected their demands to dissolve his four-month-old government.

“The government will act decisively with any provocateurs,” he said.

“I will not dissolve the house because of violence.”

Abhisit said that some protesters wanted to trigger “chaos on the streets,” adding that the attack on his motorcade a day earlier showed that there were deliberate efforts at provocation.

The unrest has also prompted speculation that the army could mount another coup, despite the fact that Abhisit and his ministers are accused by their opponents of being backed by the military.

But General Anupong Paojinda, Thailand’s army chief, ruled out such an option.

Abhisit went even further earlier in the week when he said that the country faced “civil war” after more than three years of instability.

The “Red Shirts” are angry about the way Abhisit took power in December, after a court decision that removed Thaksin’s allies from government.

That ruling came after months of protests by rival, yellow-shirt protesters claiming allegiance to the monarchy, who occupied Government House and organised a blockade of Bangkok’s airports late last year.

Thaksin, who is living in an undisclosed foreign country to avoid a prison term for corruption, promised that the anti-government protests would mark a “historic day for Thailand”.

“We will come peacefully but we need as many people as possible to show that the Thai people will not tolerate these politics any more,” he said in a speech via video link to supporters outside Government House on Tuesday.

The country remains deeply divided between Thaksin’s followers, which are found among the urban and rural poor, and his foes in the traditional power circles of the palace, military and bureaucracy.

Sean Boonpracong, a political analyst in Bangkok, said that the situation was a dangerous one for Thailand and that “the wounds inflicted on the political system are real”.

“[The protesters] are here because of the grievances they have [concerning] the current government – which is that the government was assisted by the military to form a new government … and they want to have a new constitution,” he told Al Jazeera.

“At this point the people who have demonstrated have not had any grievances addressed. So as long as that is not addressed the political crisis will continue.” 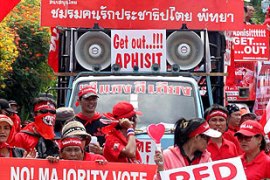 PM rejects calls to step down as anti-government “red-shirts” step up protests.