The rally comes after a two-week sit-in outside Abhisit’s Government House office and a day after demonstrators attacked his motorcade, smashing a car window but leaving the prime minister unhurt.

Protesters accuse Abhisit of being a pawn of the military but the premier rejected the calls for his resignation on Wednesday and said he planned to carry on with his day as usual.

He has so far avoided direct confrontation with the so-called Red Shirts and adopted the same tone on Wednesday while the protesters summoned supporters to Bangkok for what they called “D-day” rallies.

“There’s a group of people wanting to create chaos, but the government will do everything to restrain them,” he said in an interview on Channel 3 television.

“If there’s rioting, we will have to do something. I can affirm there will be no violence starting from the government’s side.”

Earlier in the week, Abhisit said that the authorities would not tolerate violence or “allow a civil war or a people’s revolution”.

For now, the rally was mostly carnival-like with rousing speeches, our correspondent said, but she added that many more protesters were expected to flock to the city as Thai New Year holidays begin on Thursday.

Protesters were expected to be brought in from rural areas that form the backbone of Thaksin’s support.

The authorities were taking no chances and Major-General Suporn Phansua, a spokesman for the Bangkok police, said 10,000 security personnel had been deployed, including at Government House and Prem’s residence.

The government says the protests will not disrupt a summit this week of leaders of the Association of Southeast Asian Nations (Asean) and regional partners, including China and Japan, in the coastal resort of Pattaya, about 145km south of Bangkok.

Thaksin, who fled into exile last year to avoid a Thai jail term for corruption, said late on Tuesday that the protests would mark a “historic day for Thailand”.

“We will come peacefully but we need as many people as possible to show that the Thai people will not tolerate these politics any more,” he said by videophone to supporters at a rally outside Government House.

Abhisit came to power in December after a court ruling removed Thaksin’s allies from government.

The court decision had come after a long street campaign by anti-Thaksin protesters called Yellow Shirts, who claim allegiance to the Thai monarchy and fought to oust Thaksin’s allies after their protests also led to the 2006 coup that toppled Thaksin.

The country remains deeply divided between Thaksin’s followers among the urban and rural poor, and his foes in the traditional power circles of the palace, military and bureaucracy. 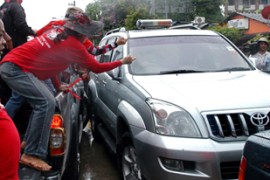 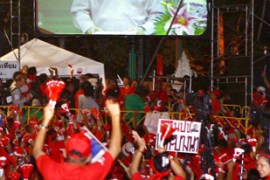 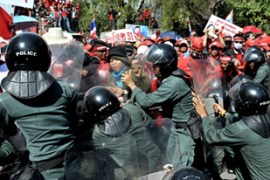