Demonstrators are demanding a re-run of the vote, which international observers have declared to be free and fair.

Vlad Filat, leader of the opposition Liberal Democrats, said on Wednesday that election officials had refused a recount and that he expected “some very serious repression” of the government’s detractors.

“They have just informed us that the Central Election Commission has rejected this [a recount]. They have broken off the agreement we reached with [President Vladimir] Voronin,” Filat said.

“I am not ruling out arrests both of political leaders and participants,” he said.

The demonstrations by at least 10,000 mostly young people turned violent on Tuesday as people stormed and ransacked the parliamentary and presidential buildings.

Windows were smashed and furniture was removed from the buildings and subsequently set on fire.

Riot police regained control of the offices early on Wednesday.

Voronin, who is also the Communist party leader, accused pro-European opposition parties of being behind the demonstrations that left more than 50 people wounded.

In a statement read out later on Moldovan TV by a journalist, Voronin called opposition parties “fascists [who] want to destroy democracy and independence in Moldova.”

He vowed that his government would “decisively defend the democratic choice of the people”.

Neave Barker, Al Jazeera’s correspondent in Chisinau, said that protesters were massing, if in smaller numbers than on Tuesday, in the capital and that there was a danger of violence.

“There are about 1,000 people in the main square … They are waving Moldovan flags and calling for more elections … and are determined to make sure that the next president will not come from the Communist party,” Barker said.

The Communists won another four-year term on Sunday after taking about 50 per cent of the vote.

They gained a majority of 61 seats, allowing them to select a new president without parliamentary ratification.

The party has ruled for the past two terms since 2001 and Voronin is not allowed to sit for a third successive term as president. 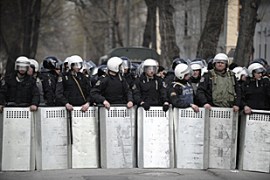 Moldovan protesters vow to fight on 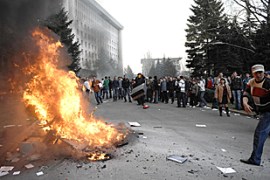 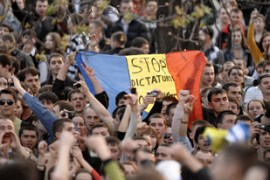