Maria D’Antuono, the 98-year-old, who was said to be in good condition, told the ANSA news agency that she had whiled away the time by “doing crochet”.

Rescuers were trying to reach Eleonora Calesini, the 20-year-old who had a leg pinned by a concrete beam and endured nearly two days without water, when Tuesday’s big aftershock struck.

But a pair of fallen concrete pillars that had created a survival space for the student held, and 90 minutes later, rescuers pulled her conscious from the wreckage.

Addressing a news conference in L’Aquila on Tuesday, Silvio Berlusconi, Italy’s prime minister who has declared a state of emergency in the central Abruzzo region, said 150 people had so far been pulled alive from collapsed structures.

Saying that the government had deployed 7,000 rescue workers, he added that the search would go on for at least two more days.

Survivors of the quake and aftershocks continued to shelter in tents and formed long lines to receive food donations on Tuesday.

The civil protection agency said that tens of thousands of people had been made homeless by the magnitude 6.2 quake which damaged 10,000 buildings, levelling many.

Thousands of people had spent Monday night in tents, makeshift shelters and cars amid cold and driving rain.

Some people took refuge in army barracks, stadiums and sports centres as temperatures during the night dropped to about four degrees Celsius in the Abruzzo region.

The earthquake struck at 3:30am (01:30GMT) on Monday, affecting 26 towns and cities within a 30km radius of L’Aquila, the epicentre.

L’Aquila, where most of the dead are, has a population of 68,000 and lies about 100km northeast of Rome, the capital. 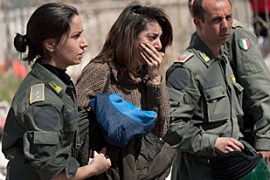 PM says 150 dead as search continues through the night and survivors huddle in tents. 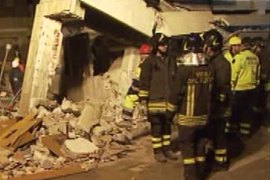 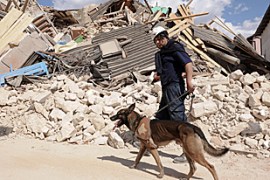 At least 90 people feared dead as thousands of buildings collapse after magnitude 6.3 quake.