Dmitry Medvedev, the Russian president, spoke with Voronin by telephone and urged him to find a quick and peaceful resolution to the crisis.

“Medvedev called for a peaceful resolution of the situation as soon as possible, the restoration of order and respect for election and constitutional norms,” the Kremlin said in a statement relayed by Russia’s Interfax news agency.

The agency also said Voronin had called on the West to help restore order.

“Moldovan authorities are extremely concerned by the mass disturbances in the centre of the capital and call on Western structures to intervene to resolve this situation,” Voronin was quoted as telling foreign ambassadors.

Vlad Filat, the opposition Liberal Democratic party leader, denied earlier reports that the two sides had reached a deal to hold an election recount after demonstrators stormed the country’s parliament and presidential offices.

Filat said: “We passed on our demands for a recount of the election and a halt in violence and also about ensuring the right to protest peacefully. But we have not received an official answer.

“Therefore, our action will continue and we call on our supporters to behave in a civilised fashion and not give into provocation.”

In a televised address, Voronin said: “Everything that they have undertaken in the last 24 hours cannot be described as anything other than a coup d’etat.”

He said the authorities: “… would resolutely defend the state against the leaders of the pogrom. We will not allow provocations that profane the symbols of the state.”

Police had fired water cannons at the crowds but were unable to stop them breaking into the buildings.

State television said a young woman had died during the protests.

A presenter on Moldova 1 television said: “There are victims. One young woman choked to death from carbon monoxide poisoning in the parliament building.”

Aisha Jung, a human rights worker in Chisinau, told Al Jazeera: “Both buildings have been completely looted. People are walking around with souvenirs like computers and chairs.

“The violence outside the parliamentary building is continuing and I haven’t seen any riot police for hours.

“I have been speaking to young and old members of the public and they all say the election was rigged. Pensioners say it’s time for the young to take control, that this should have happened a long time ago.”

Earlier, the country’s three main opposition parties,  the Liberal party, the Liberal Democratic party and Our Moldova Alliance had held talks with Voronin and Zinaida Greceanii, the prime minister, following the protests.

It was the second day of protests in the former Soviet state.

Earlier, Voronin had demanded an end to what he called the “bacchanalia” of protests, saying: “Challenging the results of the election is no more than a pretext.

“We have no final election results. It is strange for us that the people organising this bacchanalia are in such a hurry.”

Voronin is not allowed to serve a third consecutive term, but has indicated that he wants to maintain control of the government after the election victory.

It is not clear what position he would take in the new administration.

The country’s central election committee said on Monday that the Communists had secured about 50 per cent of the vote in Sunday’s polls, with 98 per cent of the ballots counted.

They gained 61 parliamentary seats meaning that they do not need to consult parliament to choose a new president. 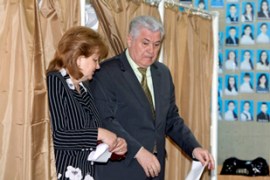 Election could decide if one of Europe’s poorest nations moves closer to Russia or EU.