Rehman Malik, Pakistan’s interior ministry chief, said: “He wants to leave as quickly as possible to be with his family. We will make arrangements [for that to happen].”

Solecki’s kidnap was the most high profile Western kidnapping in Pakistan since 2002, when Daniel Pearl, a US journalist, was snatched and beheaded by al-Qaeda fighters.

“We used all our resources to get his release,” he said.

Pakistan had condemned the kidnapping and offered a reward of one million rupees ($12,610) for information leading to Solecki’s rescue.

The Baluchistan Liberation United Front, the organisation claiming to hold Solecki, had threatened to kill him unless the government freed more than 1,100 “prisoners”, but numerous deadlines came and went without incident.

Pakistan expressed hope in late March that it would soon secure Solecki’s release and had set up a committee to investigate the captors’ demands.

The UN frequently expressed concern about Solecki, who was in poor health, appealing for him to receive immediate professional medical care and expressing their willingness to speak directly to his captors.

Hundreds of people have died in Pakistan’s oil and gas-rich Baluchistan province since late 2004, when fighters took up arms against the government demanding political autonomy and a greater share of profits from natural resources.

The province, which borders Iran and Afghanistan, has also been hit by attacks blamed on Taliban fighters.

Solecki’s release provides a boost to Pakistan’s beleaguered government, which is battling a wave of violence across the country and was criticised by Poland over the beheading of a Polish hostage in February. 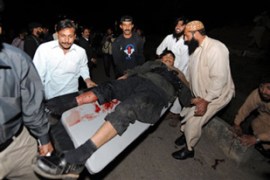