Hyun In-taek, South Korea’s unification minister said his government will study the North’s demands before deciding whether to agree to talks on reviewing business conditions at Kaesong.

But he said North Korea must “immediately stop the actions which create tension between South and North”.

Last week, North and South Korean officials met for talks to discuss the future of the industrial park, but they ended without progress.

The meeting had been seen as a major step – the first government-to-government dialogue since Lee Myung-bak, the South Korean president took office in February last year.

But the talks lasted only 22 minutes and were preceded by a full day of arguing over how they should be conducted.

North Korea had requested the meeting to discuss the future operation of the Kaesong park where South Korean firms benefit from cheap North Korean labour and land, while the cash-strapped North receives a steady flow of foreign currency in return.

Relations between the North and South Korea worsened dramatically since Lee assumed the South Korean presidency in February last year.

The Kaesong park opened in 2003 and was hailed as a model for economic co-operation between the two Koreas.

But in December, Pyongyang restricted border crossings and expelled hundreds of South Korean managers from the park, threatening to close the facility completely. 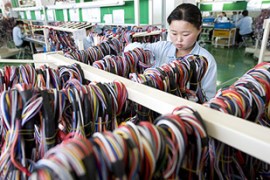 Official talks at industrial complex in North Korea lasts for only 22 minutes.