The meeting also comes amid rising tensions over Pyongyang’s moves to pull out of six-nation talks aimed at nuclear disarmament,  following a statement issued by the UN Security Council condemning the North’s rocket launch in early April.

In further signs of deteriorating relations, North Korea accused the South on Wednesday of tampering with a border marker.

The North says the South Korean military moved a marker on the heavily armed border dozens of metres to the north, calling the move a “serious military provocation” and a “vicious criminal act”.

The North’s official Korean Central News Agency (KCNA) said the country warned it would “take a measure for self-defence and the South Korean warmongers will be held entirely accountable for all the ensuing consequences” unless the
marker is returned to its original place.

North Korean officials also announced during the brief talks that they would not release a detained South Korean worker. He was arrested last month for allegedly denouncing the country’s political system.

Lee Jong-joo, a spokeswoman for South Korea’s unification ministry, said that the North is prohibited from taking steps against the worker other than a fine, warning or expulsion under agreements the two sides have reached in the past to handle such cases.

However, there has been media speculation in South Korea that the North might put the worker on trial.

He was detained on March 30 and he has only been identified by his surname Yoo.

“We are sorry to the public for having failed even to meet our worker and returned home with him due to North Korea’s unilateral rejection,” the South Korean delegation to the talks said in a statement released after officials
returned to the South.

But despite the tension, the two sides appear to have left room for further meetings.
“Dialogue between South and North [Korean] authorities will continue,” a South Korean presidential statement said, but did not provide any timeframe.

North Korea had requested the meeting to discuss the future of the Kaesong Industrial Park, where South Korean firms benefit from cheap North Korean labour and land, while the cash-strapped North receives a steady flow of foreign currency in return.

But relations between the two countries had worsened since Lee Myung-bak became South Korea’s president in February 2008.

In December, Pyongyang restricted border crossings and expelled hundreds of South Korean managers from the industrial park, which was once hailed as a model for economic co-operation between the neighbours.

This was in response to Seoul’s decision to cut aid to the North in an effort to push it towards denuclearisation. 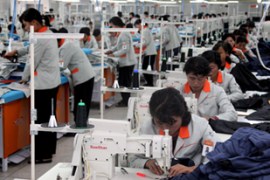