The health body could be moving closer to declaring a pandemic alert of five for the flu, which would indicate the virus is being transmitted between humans.

“It appears we are moving closer to that, but we are not there yet,” Keiji Fukuda, WHO acting assistant director-general, said on Wednesday.

Barack Obama, the US president, has described the situation as serious and urged US schools with suspected cases to close.

“This is obviously a serious situation, serious enough to take the utmost precautions.”

Obama called on local officials to be vigilant in tracking suspected cases and said “more extensive steps” may be required.

Reports of the toddler’s death in Texas came hours after Germany’s national disease centre said three people there had the flu strain and Austria confirmed its first case of the virus.

The flu strain has also been confirmed in Canada, New Zealand, Israel, Britain and Spain.

Fears of a pandemic have led to flight cancellations, tourism industry losses and bans on pork imports around the world.

Mexico City has estimated the outbreak is costing companies at least $57m a day and contributing to a 36 per cent loss in tourism revenue.

Mexico’s finance ministry has established a $450m fund to fight the virus, after health authorities said up to 159 people may have died from the new strain of H1N1 virus.

Obama has asked congress for $1.5bn to respond to swine flu, over fears that the virus could further affect the global financial crisis.

The US Centres for Disease Control and Prevention on Tuesday raised the number of cases in the US to 64. One other case was reported in the US state of Indiana and two more confirmed in Massachusetts.

Ten countries have banned pork imports from some US states, including China – the second biggest buyer of US pork – despite assurances that the contagious disease cannot be transmitted in meat.

Egypt ordered the slaughter of hundreds of thousands of pigs as a precautionary measure on Wednesday, a move that angered some of the country’s farmers.

Dave Warner, from the US pork producers’ council, said: “I think the economics right now is being driven by fear of what could happen, rather than what really is happening.”

Cuba has banned all flights to its neighbour and Argentina announced on Tuesday a five-day ban on flights arriving from Mexico.

Health ministers from the region are to hold an emergency meeting on Saturday to discuss the threat of a swine flu pandemic.

The WHO was set to hold a “scientific review” of the outbreak to collect what was known about how the disease spreads, how it affects human health and how it can be treated.

Jose Cordova, Mexico’s health minister, said that 2,498 suspected cases of swine flu had been reported in the country.

“And if you listen to government figures, they say the number of cases are beginning to level off.

“But health officials across Mexico will tell you they’re swamped and that their own teams have begun to get sick now.”

Paul Garwood, a WHO spokesman in Geneva, told Al Jazeera that while there was no vaccine for the new virus, it could be treated with drugs.

“It’s new, it’s causing severe illnesses in Mexico and people should be aware of this.

“At the same time we know that this illness can be treated with drugs that are on the market and that symptoms are mild and they are recovering.” 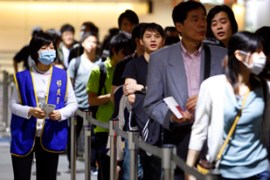 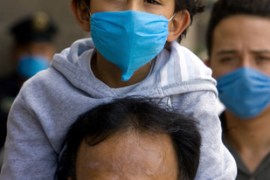 Up to 159 may have died from disease as number of countries with confirmed cases increases. 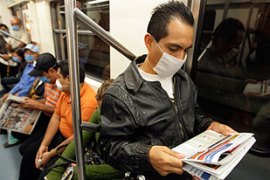 WHO says ‘prepare for flu pandemic’ 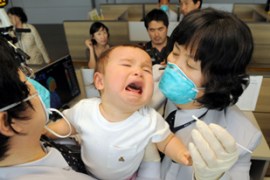