Icelanders voting in parliamentary elections on Saturday have one simple wish: that the next government lead the country out of its deep economic crisis. But with no party offering a clear plan for economic recovery, much will depend on trust.

Standing in a vast, black volcanic lava field, I was reminded of something I read before coming to Iceland. When the American space agency Nasa decided to send men to the moon, it actually sent them to Iceland first, to acclimatise to what they imagined the lunar landscape might be like.

These days Icelanders and the world are rather more focused on the new-found financial wastelands here. And the new political landscape that will follow.

It will become clear after voting on Saturday, but already it is likely that the caretaker government that came to power in February will get to keep the job.

For a number of reasons, that’s significant. Not least, because Johanna Sigurdardottir, the interim prime minister, is both a woman and a lesbian – the first openly gay prime minister anywhere, ever.

As you might imagine, that means there is no problem with civil marriages or gay adoption in Iceland.

But it also represents a total reversal of fortune for the long-incumbent Independence party that failed so spectacularly to check the activities of the banks, which might in turn have prevented Iceland’s economic collapse.

This election, then, is an opportunity for Icelanders to achieve closure and move on.

At 67, the unprepossessing, white-haired Sigurdardottir is hardly fresh blood.

She has been a socialist politician for some 30 years. But she breathes new life into a thoroughly male-dominated political playing field.

If victorious, the coalition between her Social Democrat party and the Left-Green party will bring more women into politics than ever before. And that looks set to have a knock-on effect on the gender balance in business as well.

Since the interim government came to power, a number of women have been appointed to head up the restructuring of the banks.

I spoke to a professor of politics (who is also a feminist) called Silja Bara Omarsdottir: “There’s a strong pressure to bring in women who are more responsible, maybe even more risk-averse and not so risk-seeking,” she told me.

“These young men were living the way of the Vikings, going out and pillaging, and this is something women wouldn’t do.”

Cleaning up in the wake of pillaging young bankers is a messy business. Jobs have gone, so have savings and pensions.

The international prestige this tiny nation once enjoyed for its wealthy and efficient ways is now bruised by the ignominy of being the only European nation ever to have called on the IMF for help. There’s plenty the new government needs to do.

“It has been a difficult winter for all Icelanders,” Sigurdardottir told party supporters in an informal gathering at its homely headquarters.

“But we Social Democrats can look back proudly because I feel, and the nation too, that we have laid the foundation for recovery.”

One of the problems with the mess Iceland is in is that it is simply so huge, so unprecedented, that no one seems to know how to get out of it.

The country’s debts exceed its GDP eight times, according to some calculations. Not many Icelanders know what their probable prime minister means by “foundation for recovery”. They know what she means when she promises lower interest rates and more jobs by the end of the year. But, again, she hasn’t told them how she plans to achieve it.

So the nation will have to fall back on the one thing that let them down so badly before: they will simply have to trust again. 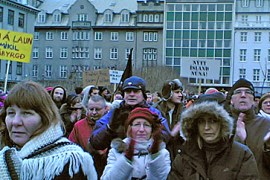 Anger and uncertainty in Iceland