Al-Bashir had expelled 13 international aid groups and three local ones after the International Criminal Court (ICC) issued an arrest warrant for him on charges of war crimes and crimes against humanity in Darfur.

Kerry, who is also the senate’s foreign relations chairman, said the US wanted to strengthen ties with Sudan.

His trip, which is expected to include a visit to Darfur, comes a week after a visit by Gration, the US envoy to Sudan.

Washington’s overtures are seen as a softening of its stance on al-Bashir, particularly after Hillary Clinton, the US secretary of state, said shortly after the expulsion of aid groups that al-Bashir would be held responsible for “every single death” in the places where the agencies had operated from.

Relations between the US and Khartoum had been strained for many years, particularly after the US imposed sanctions in 1997 for harbouring Osama bin Laden, the leader of al-Qaeda.

It also bombed a pharmaceutical plant in Sudan a year later, saying  the site was used to make chemical weapons.

The UN says that the war in Darfur that began in 2003 has killed about 300,000 people. Khartoum disputes the figure and says only 10,000 people have died in the conflict.

The unrest was triggered by a rebellion started by Darfuris who accuse the government of marginalising them. 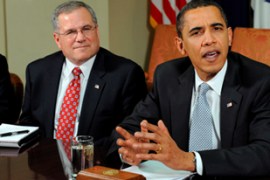 Senator to visit Darfur but will not meet Sudanese indicted leader Omar al-Bashir.