“The girl was sick for some five days, the illness was grave, but she
received no treatment. The exact cause of the death cannot be determined earlier than Friday when the first test results arrive.”

Media in Hong Kong said on Thursday that Cui Cinian may have died from Sars, a contagious disease that spread worldwide in 2002 and 2003 and killed at least 774 people.

Gennady Onishchenko, Russia’s chief sanitary officer, also told Itar-Tass that the condition of the other passengers did not cause concern.

“The passengers have been under medical supervision during the entire
travel time: doctors took their temperatures and carried out examinations,” a company official said.

Amid the public health alert, Russian authorities have increased health checks on migrants coming in from China. 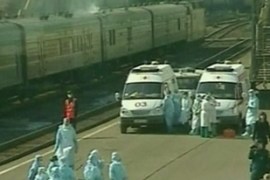