Kazmi has asked for government protection, saying he is concerned about his safety.

Kasab’s first state-appointed lawyer was dismissed over perceived conflict of interest shortly after the trial began on Wednesday.

The trial judge said Anjali Waghmare was denounced for acting in a compensation case for a victim wounded during the deadly attacks as well as accepting the brief to defend Kasab.

Overnight, the Pakistani authorities had failed to respond to Kasab’s request to provide him with a defence lawyer.

The Mumbai Metropolitan Magistrate Court’s Bar Association had previously resolved not to represent Kasab, while some lawyers who said they were willing to take on the case had their homes attacked.

The Hindu nationalist Shiv Sena party has called for Kasab to be executed without trial outside the Mumbai railway station where many of the victims were killed.

Prosecutors say Kasab and nine others, who were killed during the attacks, are responsible for the deaths of 166 people and the injury of 304 more.

Kasab, 21, is said to belong to the banned Pakistan-based group, Lashkar-e-Taiba.

He could face the death penalty if convicted of charges including waging war on India, murder, attempted murder and kidnapping.

Two Indian nationals are also on trial on charges of providing the group with logistical support before the attacks. 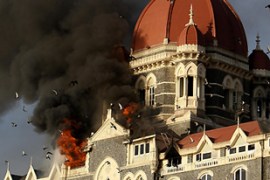