They first met Saad Hariri, the son and political heir of Rafiq al-Hariri, a former prime minister killed by a car bomb in Beirut in 2005.

Feltman said it was appropriate to meet Hariri first as an international tribunal to try the killers of his father opens its doors in The Hague.

The US visit to Syria has made some Lebanese politicians after the country succeeded in breaking away from almost three decades of political and military domination by its larger neighbour.

Political divisions have been driven by suspicions that Syria was behind al-Hariri’s assassination. Syria has denied such accusations.

Feltman said Washington had a “long list” of concerns that he and Shapiro planned to discuss with Syrian officials when they meet on Saturday.

‘Lebanon for the Lebanese’

“Our trip to Syria … is an opportunity for us to start addressing these concerns and using engagement as a tool to promote our objectives in the region,” he said.

He said the basic message of the visit is to tell Syria that Lebanon is for the Lebanese.

US officials have repeatedly maintained that renewed ties with Syria, which for years held sway in Lebanese politics, would not be at the expense of Lebanon.

Since 2006, the US has committed to giving $410m in military assistance to Lebanon as it seeks to bolster the country’s pro-Western government.

Feltman also hailed forthcoming legislative elections in Lebanon, which are set to take place on June 7.

“This will be an important milestone in Lebanese history and the US will support the Lebanese authorities’ efforts to ensure that they are free, fair, transparent and unmarred by political violence,” he said.

The poll will be between the Western-backed majority in parliament against an alliance led by Hezbollah, a group backed by Syria and Iran. 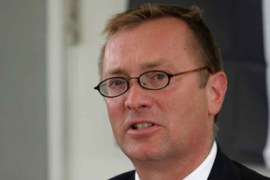 US officials set for Syria talks