The young leader describes Ravalomanana as a dictator starving his people and late last year mounted a fierce political challenge against the president, who has been in power since 2002.

They told the AFP that security officials attempted to enter Rajoelina’s residence overnight to detain him.

The Rajoelina, 34, last week walked out on talks with Ravalomanana, accusing his rival of playing down his camp’s grievances and pledging to revert to mass street action.

The United Nations and African Union have dispatched envoys to try to defuse the political crisis and prevent a resumption of violent clashes that have already killed close to 100 people since the start of the year. 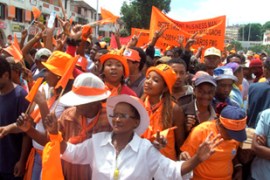 Thousands gather in capital as political crisis threatens to escalate.