A team of scientists have spent the last 10 years on Ward Hunt Island, a remote spot at least 4,000km northwest of Ottawa, studying the summer ice cover in the Canadian Arctic, a few degrees from the North Pole.

After sharing his findings with the Canadian parliament, Vincent said: “I was astounded as to how fast the changes are taking place. The extent of open water is something that we haven’t experienced in the 10 years that I’ve been working up there.

“We are losing, irreversibly, major features of the Canadian ice scape and that suggests that these more pessimistic models are really much closer to reality.”

The Arctic is warming at twice the rate of the rest of the world and the sea ice cover shrank to a record low in 2007 before growing slightly in 2008.

Researchers say some of the damage would be permanent and that the warming in the Arctic was a sign of what the rest of the world could expect.

“Some of the environmental effect is unstoppable. We’re in a train of events at the moment where there are changes taking place that we are unable to reverse, the loss of these ice shelves, for example,” Vincent said.

In 2004 a major international panel forecast the cover could vanish by 2100. Last December, some experts said the summer ice could go in the next 10 or 20 years.

Larry Hinzman, director of the International Arctic Research Centre in Fairbanks, Alaska, told Al Jazeera that the latest study is in line with what other scientists have found.

“The study is consistent with the observations of the rate of decrease of the ice … If the ice melts, like the report suggests, it could have major consequences,” he said.

“If the sea ice melts, that is going to allow the oceans to absorb much more heat,” Hinzman said.

In 2008 the maximum summer temperature on the Arctic’s Ward Hunt hit 20C compared to the usual 5C.

Last summer the five ice shelves along Ellesmere Island in Canada’s Far North, which are at least 4,000 years old, shrunk by 23 per cent.

“As the Arctic warms, so does the rest of the globe … as a result we may see some associated increase of sea level,” Hinzman said.

“Right now most of the shipping that goes between Asia and Europe must go around to the Panama canal or around the tip of South America.

“If the northern sea route does open up, that would make it the most efficient route for shipping between Asia and Europe … that would be dramatic and have global implications.” 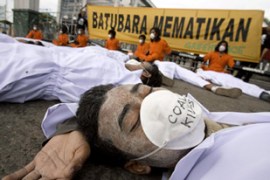 Leading scientist warns that the the earth is warming faster than previously thought. 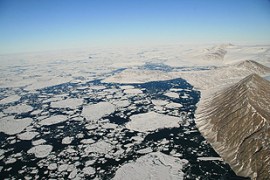 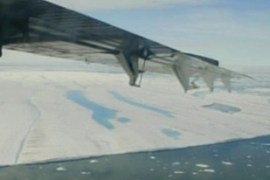 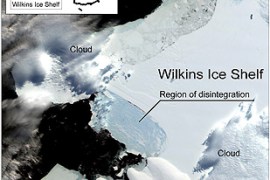 Polar region threatened with further disintegration after iceberg breaks away.