Abu Sayyaf wants the police and civilian militia members pulled back from a loose cordon around its stronghold.

Yasser Igasan, an Abu Sayyaf official, told Al Jazeera by telephone: “The hostages are all OK. They’re still here, very much alive. But they are very scared because of the ultimatum.

“If the military does not pull out, we will behead one of them,” he said.

Igasan said the pull-out does not guarantee the hostages’ release, but it would open the way for further negotiations.

He said the Abu Sayyaf had not asked for a ransom, and the group had political demands concerning a separate Muslim homeland that they would only talk about if the troops withdrew.

“We have objectives that are not just for us, but for all Muslims,” he said.

The kidnapped staff – seized on January 15 – include Eugenio Vagni, 62, of Italy, Andreas Notter, 38, a Swiss and Mary Jean Lacaba, 37, a Filipino.

It was not immediately clear which of the three would be beheaded if Abu Sayyaf carried out its threat.

Aeschlimann said the ICRC had been in contact with the hostages on Monday, and that the beheading threat “has obviously increased the stress and hardship they are experiencing”.

“Following the kidnappers’ renewed threats, the ICRC once again appeals to the abductors’ sense of humanity and asks them to avoid  taking any action that could endanger the lives of Mary Jean, Eugenio and Andreas,” he said.

Aeschlimann also called on Philippine authorities to “refrain from further military operations in the area” as it could put the hostages at risk.

But the government seemed reluctant to heed his appeal.

“There is no possibility that demand can be granted,” Ronaldo Puno, the interior secretary, said on Friday.

“We will not surrender the entire island to the capricious demand of the kidnappers,” he said, displaying maps on a screen to show where soldiers and police forces were deployed and the reported location of the kidnappers and hostages.

Pulling back to a “very small area” in the provincial capital is  impossible since “if we do this every person outside this area  becomes a potential kidnap victim,” Puno said.

Five people have already died in clashes between the kidnappers and the military trying to hunt them down. 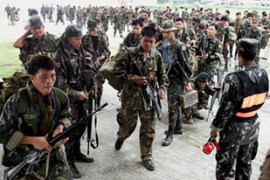 Hostages hit out at “catastophic” military offensive against kidnappers in Jolo island. 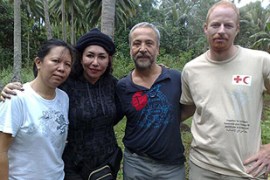 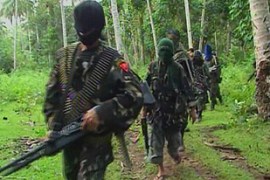 Tents and other equipment belonging to Abu Sayyaf hostages found on Jolo island. 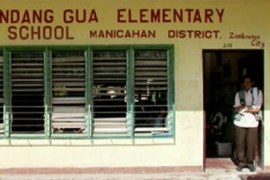 A series of abductions have caused uncertainty and fear in southern Philippines.