The demonstration marked the start of nearly a week of protests in London and other European cities before the Group of 20 summit in London on April 2.

About 15,000 people gathered in Berlin, the German capital, sporting headbands reading “Pay for it yourselves” and some carried a black coffin topped with red roses symbolising what they said was the death of capitalism.

A demonstration also was held in Frankfurt, Germany’s banking capital under the slogan: “We won’t pay for your crisis.”

In Vienna, the capital of Austria, around 6,500 people gathered in the city centre with paper piggy banks, balloons or signs that read “Capitalism can’t be reformed”.

A group of around 200 protesters in Paris, the French capital, dumped a pile of sand outside the city’s stock market to mock the use of island tax havens.

The protesters’ main message was a call to world leaders to act on the deepening global recession, Moshiri said.

The protest remained relatively peaceful. British authorities have said they are spending $10m to ensure security at the summit.

World leaders, including Barack Obama, the US president, are expected to discuss the global economic crisis, among other topics at the summit.

The US is emphasising more public spending to stimulate the economy while several European countries are calling for new regulations to be implemented. 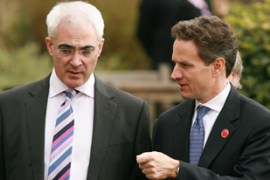